This has been a week full of epiphanies, some good and some downright disturbing. For the last several months I’ve been suffering—and it’s no exaggeration to say ‘terribly’—from some kind of shoulder affliction. It got worse during lockdown, what with being at the computer all day long with little reprieve, to the point where I was having trouble sleeping, writing, and couldn’t even work in the garden without suffering the consequences. I’d seen my doctor, Dr. Monteith (not his real name), he of the dickish bedside manner, at the beginning of the year; with minimal examination, he pronounced it tendonitis and recommended physiotherapy. Then everything closed—physiotherapy isn’t much help virtually, which I’ve written about before, and I’ve never been good at following through on things like “stretch with this weird rubber band 5 times a day”. Next, I got a prescription for an anti-inflammatory that made me woozy and didn’t help the pain. Then the world started to open up again, and I could see my massage therapist, but that didn’t help a lot either, even though under normal circumstances she’s magical and wonderful. Finally, I called the doctor’s office at the end of my wits—in a fateful turn of events, my regular doctor was on holiday, and his replacement immediately ordered an X-ray and ultrasound. ‘Immediate’ turned into a month though—apparently there were a LOT of people waiting for appointments and I had to wait until July 31 to get it done. Three days before, I made the dreadful mistake of googling “shoulder pain and cancer” just to see if there was anything to be concerned about, and I ended up crying hysterically when I read about something called a Pancoast tumour:

It DID make me feel a little better that I hadn’t wasted away to a shadow thanks to some rare tumour, but that still left the mystery of the incredible pain I was experiencing. I got to the clinic on the 31st and, despite the crowds, I was seen almost right away by the ultrasound technologist who was very dour:

Me: By the way, I have a latex allergy.
UT: Uh, OK.
Me: It says on the sign at reception that I’m supposed to notify you.
UT (rolls eyes): OK.

Despite her attitude, it was a real treat to have an ultrasound that I didn’t have to drink gallons of water for and then have to hold it in while someone pressed down on my bladder. When she was done, it was off to X-ray, where the technician was slightly more pleasant. Then the waiting began. It was the Friday before the long weekend, so I wouldn’t get any results until at least last Tuesday. And that meant several days of worrying. Finally, on Wednesday morning, the doctor’s office called. My regular physician was back, apparently, and had seen the results:

Nurse: Dr. Monteith says you have calcific tendonitis.
Me: OK, what does that mean?
Nurse: He says you should get shock treatments.
Me: Get what? Won’t that be painful and somewhat brain damaging?
Nurse: Hang on. Sorry, shock wave treatments. You can get it done at a physiotherapy office.

So, epiphany number 1: Calcific tendonitis, which means that I have calcium deposits grinding around in my tendons and muscles, which accounts for the pain. Shock wave therapy is supposed to break them up and help your body reabsorb them.

The second epiphany came on Thursday when Ken picked up the radiologist’s report from Dr. Monteith’s office so that I could take it to my shock wave treatment next week. It says, and I quote: “Calcific tendinopathy involving the subscapularis and supraspinatus tendons, calcification protruding through the humeral head, otherwise unremarkable.” 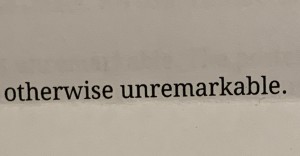 “UNREMARKABLE”?! Excuse me?! It was signed M. Rooney, and all I can think is it’s Mickey Rooney and this is some kind of joke. Does M. Rooney not know about my outstanding colon AND the lifetime achievement award I received for my last mammogram? I was PERSONALLY CONGRATULATED by the Chief Health Officer for both of those! Well, M. Rooney, you’ve poked the bear in the worst way possible. From this moment on, I VOW to be nothing less than completely f*cking remarkable in everything I do. And if my dentist is reading this—you better get ready for the whitest, most cavity-free remarkable teeth you’ve ever seen in your whole goddamn life.

And speaking of remarkable, my good friend Paul, he of the Notes From The Avalon blog, has just started a new blog called The Desert Curmudgeon. One of the things he likes to write about are weird Canadian TV shows, and even though he’s American, I’ve awarded him honorary Canadian citizenship. His new focus for commentary is on the short-lived 1970s Canadian sci-fi series The Starlost, and he asked me to write an intro to his first hilarious installment, which you can read here. I highly recommend him, and hope you pop over and maybe give him a follow.