Last month, Ken and I decided to rent a booth in an antique market owned by a friend of ours. You may be surprised by this, but years ago, Ken and I had an antique business called Washington House Antiques. It’s a fancy name—perhaps you were thinking we aspired to the Oval Office—but let me assure you the name came about because we lived in a house in Washington, Ontario and I’m the kind of person who named my stuffed animals Teddy or Rabbit or Koala. We had a store on our property, I had a booming eBay business, and we had booths in several markets. But then I started working full-time, and Kate got older and life just got too busy. Recently though—in fact, it was right after Big Junk Day—I looked around the house and realized I could be one step away from being featured on Hoarders. It would be an upscale episode where the psychologist would question my desire to hang on to 40 pieces of Beswick Art Pottery from the 1920s, and I couldn’t bear the thought of my family being brought in, ‘intervention-style’:

Mom: Honey, let them go. You haven’t even dusted them in months.
Dad: Och! They’re neither use nor ornament, lassie. Gi’ ‘em up!
Brother: Speaking as someone with a PhD, you could earn good money with those. Let me see the contract with the antique market. 10% commission? Not bad.
Ken (whispers): Don’t let them into my office!

At any rate, I had a lot of things in the house and sheds that I could use to stock a booth, but at a certain point, I ran out, and now I have to find other sources for things to sell. Which brings me to the internet and more specifically Facebook Marketplace, where the average person can list their absolutely weird stuff for free. Here’s a small sample of things that I’ve seen over the last little while that made me do a double-take:

There are many words that begin with the letters ‘sm’. Smell, smooth, smack, small, sment…SMENT? This is an ad that I actually saw a couple of months ago and I’ve thought about it every day since then. It’s a small statue of a boy holding a large misshapen bowl. The caption for the listing says “Sment boy”. Two things are noticeable about this ad. First, THE BOY IS NOT EVEN CEMENT. It looks like some kind of pottery or plaster that the person has painted with acrylic paint. Second, the paint brushes are standing in a jar labelled “Cayenne Pepper”. How the f*ck do you know how to spell “Cayenne” but not “Cement”?! Maybe the person was being really clever, like “I know it’s not really a cement statue, but if I call it Sment then no one can sue me for trademark infringement. Kind of like that Mickey Mouse/Mighty Mouse thing.” At any rate, it’s not very appealing, and I did NOT buy it. 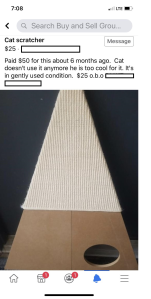 This one looks very innocuous, but the real weirdness is in the description. This is a cat scratching post made of cardboard and fabric. The reason the person is selling it is because his cat is “too cool for it”. So I guess if you have a cat who’s nerdy or awkward, this is the perfect gift for them? Personally, I think the reason the cat doesn’t use it is because cats are notoriously lazy, and have no interest in walking all the way across a room to use a scratching post when they can just scratch the arm of the chair they’re lounging about in. I speak from experience.

Right now it’s July, 5 months into the middle of a global pandemic, and this charming display is being sold. It’s being advertised as a “Coffin shape diorama”. I can’t tell how big it is since the pictures of the measuring tape are all blurry. I’m just praying it’s not life-sized, because there are several disembodied arms and legs in there. To be honest, I can see a market for something like that around Hallowe’en. OR if you have neighbours who insist on having large parties with no social distancing or masks, I think this would be great to put on their porch as a warning.

This one boggles my mind. Why on earth would you want a pool thermometer with a large bowel movement attached to it like a handle? Seriously, if you’re willing to pay $17 for something like that, I will come to your house every day with one of Atlas’s poops and throw it in your pool for free. AND tell you if the water is warm.

I was scrolling through Marketplace when I saw this picture, and my first thought was, “Who’s selling that weird, sad-looking dog?” and then I read the description, which said “Antique Scarf”, and my second thought was “WTF? EWWW!” It’s a dead animal. I’m not wearing that around my neck no matter how ‘antique’ it is. Basically what you’re selling is a very old, very deceased—possum? Sorry, I’m not that familiar with the types of animals people drape across their shoulders these days.

(After having a couple of people explain what Thieves Oil is made of, I googled “Why is it called Thieves Oil” and the answer was “Its name was inspired by the legend of four French thieves in the 15th century who wore a special blend of rosemary, clove and other botanicals while they robbed the dead and dying.” ROBBED THE DEAD AND DYING? They probably wore those antique animal scarves too.)