I’ve been doing a lot of research lately, and my go-to is always Google. I mean, it’s not like I can walk into a public library and take out a stack of books, although if you know anything about me and my OCD hygiene issues, you’ll know I never touch library books anyway, especially after one of my friends told me about how bedbugs can live in library books and she puts them in the freezer for 48 hours before reading them. Google is the best for finding out stuff: Firefox is obsolete, Edge is boring AF, and Bing is Satan’s search engine, which, in retrospect, might have been appropriate. Also, there are no annoying ads on Google, although you DO get ads everywhere else related to every site you visit. It amazes me that there are people who believe that bizarre conspiracy theory about Bill Gates tracking you through microchips in vaccines when Google already knows everything about you simply based on your clicks. Once, I looked at an ad for wigs, and every site I go to now has ads for wigs. Last week I posted about kittens and now Kate Spade wants to sell me earrings shaped like kittens. And two days ago, I filled in an online request for a quote from a kitchen painting company and now my gmail keeps filling up with ads for Benjamin Moore and kitchen renos. If those conspiracy theorists were really smart, they’d stop using computers all together and share their dumbassery through Morse code instead of becoming anti-vaxxers.

Anyway, I recently completed writing my first non-Young Adult novel, called The Seventh Devil, and I had to do a lot of research at different points in the plot. And then I heard that the government monitors certain topics and I got really worried that maybe I’d raised some red flags. Here is a list of things I searched for recently—tell me if you think I should be concerned:

1) What happens when you mix salt and vinegar together?
2) How corrosive is hydrochloric acid?
3) Is it illegal to make hydrochloric acid?
4) What acid is stronger than hydrochloric acid?
5) Is it illegal to buy sulphuric acid?
6) Where in Canada can I buy sulphuric acid?
7) What type of container is best for transporting sulphuric acid?
8) What acids are more deadly than sulphuric acid?
9) What does carbon tetrachloride do?
10) How does phosphine gas kill you?
11) How do you exorcise a demon?
12) What Latin phrases are best for exorcisms?
13) How do I know if my house is possessed by a demon?
14) Why does my puppy lick the carpet?
15) Is my puppy possessed by a demon?
16) What is the largest swamp in Ontario?
17) How long does it take a body to decompose in a swamp?
18) Does the government track my Google searches?
19) What kind of vehicles do government agents drive?
20)If you see a wifi called Surveillance Van 3, is it real or a joke?
21) Does stress cause hiccups? 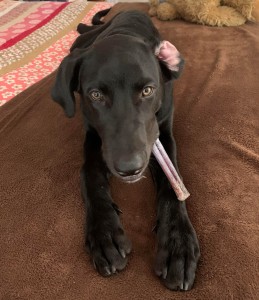 Then last week, I e-transferred Kate some money for her tuition, and just for fun, I put “Thanks for the launch codes” in the message line. Yeah, I agree—I think I should be worried.

But research is important though–I learned this the hard way many years ago in university when I was doing an English Lit/Film degree. I was tasked with presenting the filmmaker Stan Brakhage to the class, so I read everything I could about him. Remember, this was in the days before Netflix, Youtube or even the internet, so I DID in fact have to go to a library. From everything I studied, the man was a genius, but there was no way I could actually see any of his films. Then, on the day of my presentation, my film professor, a wonderfully enthusiastic and eccentric man, came up to me and breathlessly announced that he’d secured a 16mm copy of Brakhage’s masterpiece, “Dog Star Man Part III” which he would play on the screen behind me while I spoke. I was thrilled too—the lights went down, the film began, and I started telling the class all about the film and how Brakhage was “obsessed with vision, and tried to capture the three dimensions of the senses…he wanted the viewer to see in a fresh way, to disregard social conventions of seeing—” and then I realized that some people in the class were laughing and some people seemed shocked, so I looked over my shoulder at the film playing behind me and there was a gigantic nipple in the middle of the screen, and then a close-up of what looked like someone peeing, and I’ve never been so mortified and so happy to be in a dark room in my life. I literally stopped my presentation and just said, “Well. That’s so interesting,” and then we all watched as it got even more porn-y and my professor launched into a treatise on Brakhage’s ‘instinctive qualities’ and his ‘incredible technique’, and he was so ecstatic about the whole thing that he didn’t even notice that I hadn’t said another word and I got an A anyway (note that his comment below was “a brief but pithy statement not only of Brakhage but also his context”). And if you want to see “Dog Star Man” for yourself, you can just google it.