Last week, I was crossing the street at Yonge and College, trying simultaneously to avoid the taxi that wanted to run over my toes and the screaming man in the pink mini-kilt with the pigtails, when I heard a loud voice behind me say, “You know, I feel really sorry for kids these days.”

“Why’s that?” his companion replied.

I looked behind me. They were two guys in their mid-30s, wearing business suits. I braced myself for the usual bullsh*t about how today’s youth have a) no work ethic b) no social skills c) are entitled b) don’t respect their elders and so on, and got ready to roll my eyes hard enough to make that taxi back off. But I had totally misjudged the savvy pundit, who continued with “It’s a shame that, with the invention of driverless cars, most young kids today will never know the real pleasure of driving.” He continued on, reminiscing about his first car and the thrill of getting his licence until we had parted ways, me into the Tim Horton’s across the corner, he into parts unknown (but probably a very tall office tower). 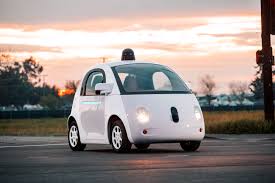 I thought about it for a minute, and I was like, “Yeah, he’s so right.” Kids who are born today will never know the joy of being the ‘captain of their own ships’, in the same way that they will never know a world without the internet, or without the threat of global environmental disaster hanging over their heads in the same way that nuclear disaster hung over mine (although thanks to the assholes who are currently in charge of both the US and North Korea, kids today have to worry about THAT too. Well done.) But then I thought about it some more and started to wonder if driverless cars weren’t such a bad thing after all, and that kids really wouldn’t be missing that much. I mean, face facts—driving is a pretty dangerous business. Hurtling along at over 100 kilometres an hour (60 miles an hour for my US readers) inside a thin metal box within a few feet of other people in the same situation, it’s sometimes unbelievable that any of us survive it at all. Airplanes, which are basically flying cars, aren’t allowed to be within 3 miles of each other horizontally, and 1000 feet vertically, but I’ve got some d-bag riding my bumper on the 401 despite the signs telling you to keep at least 2 chevrons between you and the next car. When you actually think about it, driving is scary AF, and the fact that we actively encourage our children to learn how to do it and get their licences is pretty bad parenting, like “Hey Jimmy, it’s that wonderful time for you to learn how to battle the forces of humanity, nature, and fate. Hope you remember how to parallel park!”

Personally, I can’t believe the driverless car wasn’t invented sooner. I mean, cars are a necessity in Canada, where there’s a LOT of land and you have to travel pretty far to find people and jobs, and such, but where there just aren’t enough roads, so we spend A LOT of time trying to calculate the fastest route to go anywhere, and watching Google maps closely for that red line that tells you that you’re not going anywhere anytime soon. I’ve written plenty about the ludicrous nature of driving back and forth to Toronto, and I could totally appreciate being able to read or surf the internet while I was stuck on the four lane parking lot known as the 401,or more affectionately, the “stupid f*cking 401”. But what I really want to know is this: will driverless cars obey the rules of the road, or will you be able to override them so that you can drive as stupidly as you do when you’re actually behind the wheel yourself? Because there’s always going to be that one guy who drives on the shoulder to pass, or cuts you off, or tailgates you, and if he can still do it while he’s watching a Youtube video, then what’s the point?

The only real requirement I have for a driverless car, aside from obeying the rules of the road, is something I like to call “Roadkill Alert”. The car should be able to sense whether there’s an animal about to cross the road in front of you and stop you, or shoot out a firecracker or something as warning. Last year, K left the house about 10 pm to drive back to her university residence. Less than five minutes later, she called the house. I answered the phone to hear her say, “I just got hit by a deer.” Her voice was shaking. Ken had just taken Titus out for a walk, so I stood on the porch and screamed at the top of my lungs, “Ken! Come home! K’s had an accident!” From a few blocks over, I heard him yell, “I’m coming!” and he was back at the house in under 30 seconds. K was only a couple of kilometres away, but it felt like forever until we got there. When we arrived, there were two pickups trucks who had stopped to help, and the police were already there. I grabbed K and hugged her—thank god she wasn’t hurt—but there was a deer shaped dent in her buckled hood, and the deer itself was lying at the side of the road. It was a buck with huge horns, and all I could think was 6 inches higher and it would have gone through the windshield. I won’t go into details, but the police took care of the situation, and the local guys offered to take it away. The car was a write-off, but whatever—it’s only a thing. 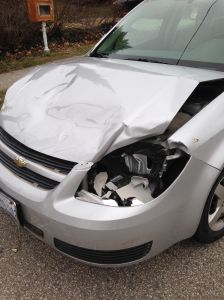 Bottom line, the deer came hurtling out of the dark and K couldn’t avoid it. So yeah—make sure those driverless cars have long-range sensors on them. And I don’t want to hear any of that sh*t about “When I was a kid, we drove into deer all the time and LIKED it. These kids today are just sheltered wussies.” Personally, I’m waiting for someone to finally invent the Star Trek transporter. Then we can say, “These poor kids today will never know the real pleasure of travelling at warp speed…”

I have a problem. It’s not a big problem, but it’s a problem nonetheless for someone like me who’s just a little OCD. Here’s the back story: Because the new owner of my previous condo was a total dick and illegally evicted me, I had to find a new place to live. Toronto is hideously expensive, and the only place I could find close to work in the timeframe I had was a 2 bedroom place. The rent on this 800 square foot box in the sky is $2400 a month, so the only way I could afford it was to get a roommate. I did, and she was lovely, but there was one problem. She kept using the good tea towel, you know, the one that’s for show. It was white and black, in a ‘Paris’ motif, and it hung from a hook in a spot that was obviously chosen for its display properties. There was another tea towel, a plainer one, that was close to the stove and sink, and simply screamed out, “Use ME!” Yet my roommate kept using the good tea towel, until it was no longer ‘good’. I would come back after a weekend at home to find it hanging all crumply and stained. I would wash it and then replace it, and put the other tea towel in a more convenient spot, but my roommate had a penchant for using the good tea towel and I didn’t know what to do. Why didn’t you just tell her, you ask? Because that would be the most ridiculous conversation in the world, like “Can you not use this tea towel? It’s for show.” How do you say that without coming off like some weird kitchen textiles fanatic? And while this may seem like a first-world problem, imagine if I had two goats. The first goat was really stylish and it was the one that I kept to impress people about my taste in goats, and thereby advertise my savvy in the goat business. The other, less attractive goat was the one I used for milk and whatnot. Imagine now, if someone slaughtered my display goat. Am I now supposed to use the milk and meat goat to make my kitchen look pretty?

And why is this a problem NOW, you ask? Because my previous roommate has gone back to school, and I have a new roommate, who also seems very nice. But I just bought new display tea towels, and I still don’t know how to have that conversation with a stranger. At home, it’s no issue:

Me: See that new tea towel I just bought? It’s for show. Don’t use it.
Ken: OK.
Titus: If it doesn’t involve food, I’m pretty laissez-faire. You know me… 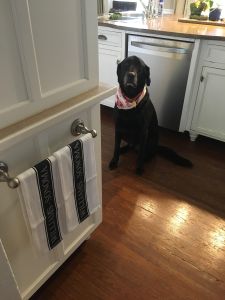 After 27 years of marriage, Ken understands that a) I’m weird and that b) the tea towels we actually use can just be put in the cupboard or drawer or whatever, and he can complain all he wants about the possibility of it getting “moldy”, but we both know that won’t happen, Ken. Yet I don’t know this new girl very well, and the last thing I want is for her to tell her friends, “I can use anything in the kitchen that I want, except for this one particular tea towel. Also there are five cutting boards—one for vegetables, one for meat, one for cheese…you know what? F*ck this—I’m moving out.”

Sigh. Kids today will never know the pleasure of a fancy, just for show, tea towel.