Well. It’s been a fairly hectic week, what with me having to drive on the highway to and from home. The upside is that I get to spend more time with Ken, Titus, and Raven. Notice that I didn’t mention K, because she’s working in an auto parts factory for the summer to make money for next year. We have her tuition covered etc., but I was like, “If you want to keep buying light sabres and land in Scotland, then get a job, kid.” I’ll explain the Scottish real estate thing later. The downside of all this driving is, of course, that I have to drive on the worst highway in the world. I’ve already said plenty about that in previous posts, so I won’t pursue it any further except to say that it gave me time to think of some pretty random things for this week’s foray into the world of the absurd.

1) Last week, I went back to Toronto on the train. During the trip, I had to use the nasty train bathroom. They always smell of pee, mostly because the train is very wobbly. It’s not a problem for me, since I SIT on the seat, but if you’re one of those people who likes to stand and try to aim at the opening (male OR female—I’m not judge-y), I can guarantee you’re going to miss at some point and get your urine all over the place. As a result, I line the seat with toilet paper just in case. After, I sat back down in my seat. Then I got off the train, and took the subway home. I must have looked pretty cute because I was getting a lot of looks, like “Hey girl,” and “Nice, old lady”. When I got to my stop, I walked to my condo, and it was all good. Then I got into the apartment and realized that I didn’t have any milk for the morning, so I decided to pop down to the Loblaw’s on the corner. I was standing at the light, waiting to cross, when a German couple approached me. I could tell they were German because they were saying things like, “Das Madchen hat Toilettenpapier auf ihrem Arsch”, which I didn’t understand, having a limited amount of high school German, but I assumed they needed directions. Then the woman said, “Excuse me,” and I was like “Sure”, thinking she needed to know where the CN Tower or the Eaton Centre was. But then she said, “You haf some papier on your back.” I tried to see where she was talking about, and the guy she was with was pointing and saying, “Das is right zere,” until finally, I got a glimpse of it, and was able to pull it off. It was a square of toilet paper. I had been walking around with a square of toilet paper hanging from my waistband for the last hour. Well, no worries—it was gone now, and I could buy milk without shame. I laughed and thanked the German couple and went merrily on my way. They seemed pleased, having helped me, and yelled out, “Es gibt noch mehr Toilettenpapier!” which I assumed meant, “We gave you help with the toilet paper!” so I waved and gave them a thumbs-up. Unfortunately, my German sucks. When I got back to my condo, finally, I started to change into my pajamas, and discovered to my horror that I had only pulled off the LAST SQUARE of toilet paper and that there were 6 additional squares that I had unwittingly tucked into my waistband in the train bathroom and which were hanging down like a paper tail the whole time I was in the grocery store. And now I need to learn more German.

2) Last week, a colleague of mine and I were having a conversation about why he was bailing on going out for a drink on his last night before leaving the secret agency for good because he and his wife just had a baby. “I have to pick up something that I found on Kijiji,” he said.

“What could possibly be so important that you’re not coming for a drink? I’m buying, for God’s sake!”

“Exactly,” he said. “It IS for God’s sake. This couple is advertising all of their daughter’s baptism and communion stuff, on sale for super-cheap. I know it sounds weird, but it was only used once and it’s generic, with the dove on it and all, so I might as well get it now rather than pay twice as much later.”

Me: Why do Catholics have pigeons all over everything?
Colleague: Not pigeons. Doves. There’s a slight difference.
Me: I’m not seeing it, but OK—why doves?
Colleague: The dove is a symbol of the Holy Spirit. Sometimes fire shoots out of its head. If you ever see a dove breathing fire, you know you’re in the presence of the Holy Spirit.
Me: Either that, or in the latest Harry Potter movie, like “Harry Potter and the Fire-breathing Pigeon”.
Colleague: Dove. It’s a dove.
Me: OK.

The next morning, I went into my office, and there on my desk, was a little dove planter, with a fern in it. My colleague popped his head in:

Colleague: I got you this as a going-away present.
Me: Cool! Does it breathe fire?!
Colleague: No, it’s only ceramic. But the plant is fake, so you can’t kill it.
Me: You know me so well. I’m going to miss you more than you know.

3) Yesterday, I was at the mall, and I decided to buy some Cinnabons for a treat. K loves them, and I could take some to my parents for dessert that night. So I went up to the counter:

So I grabbed a box from below the counter. I’m not an expert in buying ‘bons’, so I thought she was pretty mean, and very yell-y. But I got her back because just as she was packing up the box of 4, I said, “You know what? I changed my mind. I’ll take the box of 9 little ones.” And then she rolled her eyes really hard again, and gave me back the box, which I switched out. Then I paid and told her to “have a good day” but I might have said it slightly sarcastically, so I totally SHOWED HER. When I got home, I told K and Ken that the woman at the Cinnabons counter was very rude to me, and K said, “Was it the old lady with the short white hair?” and I was like, “YES!!”, and she said, “She’s always really rude to us too, when we go there.” So at least I know it’s not just me, and now I REALLY wish I knew German because I could have just smiled at her and said, “Du hast Toilettenpapier auf deinen Arsch”.

4) On Friday, it was our 27th Anniversary. Ken said “Happy anniversary” first, but I was the first one to post it on Facebook, so I thought I won. Then he posted a picture of two puzzle pieces which said “You” and “Me”, and I was like, “Aww—that’s sweet!” But then I realized it was a gif, and when I watched it, the two little puzzle pieces moved towards each other and fit together. Which sounds really cute, but the one puzzle piece had a part like a very large phallus, and the other one had an opening, so when they fit together, it looked super-dirty. And then I also realized that the puzzle piece with the phallic bit said “You”, as in me, and the apparently-lady piece said “Me”, as in Ken, and that was even more disturbing in terms of what Ken intended:

Me: I think you got the genders on those puzzle pieces wrong. At least I’m hoping. I think we’re both too old to be trying stuff like that.
Ken: What are you talking about?!
Me: That gif was a little dirty.
Ken: It was two puzzle pieces. What’s dirty about THAT?
Me: Did you watch the animation? Very pornographic.
Ken: They fit together! It’s cute, like “we’re a perfect fit”! Get your mind out of the gutter.
Me: Super-dirty. What WILL our friends think?
Ken: Happy Anniversary, weirdo.
Me: Yeah. Ich liebe dich. That means “I love your–”
Ken: No, it doesn’t. 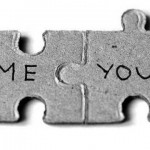