I’ve always been a huge fan of Jeopardy!. We used to watch it together as a family when I was younger, and like all the other games we played together, there were some pretty specific rules. In Trivial Pursuit, my dad had to answer every single question in all the categories for the win, instead of us just picking one, because he’s like the master of trivia AND strategy, and got all the pie slices before most of us even had ONE. In Monopoly, Dad wasn’t allowed to own either Boardwalk or Park Place, because as soon as he got it, he would immediately spend all his money on building hotels, and bankrupting the rest of us. For cruise ship trivia, we always have to wait for my mom’s final approval, because she does a ton of crossword puzzles, and she’s pretty clever with the cryptic clues. Jeopardy! was no different, except we were all bound by the same simple rule–your answer only counted if you phrased it in the form of a question. This was hard and fast—even if you were right, you got “No. You didn’t say ‘Who is…’ so your brother gets the $200.” Of course, this was engrained in my mind, and even today, when someone asks “Who’s responsible for changing the toner in the printer?”, I have to stop myself from saying, “Who is Robert?”

Ken and I always try to watch Jeopardy! together when I’m home for the weekend, but even when I’m in Toronto, we sometimes both watch it, then madly text each other the answer to Final Jeopardy before the Jeopardy! theme song is over and time is up. Last week, I texted him “Godspeed! Godspeed!”, which freaked him out until we were talking later and I clarified that I wasn’t sending him into either the next life or space (This 8 letter word is what NASA said to John Glenn the first time he departed from earth and the last time, when he died. I’m paraphrasing—Alex always says it in a much more elegant way). Of course, I lost all my money because I didn’t phrase it in the form of a question…

I usually manage to do pretty well though, having a semi-eidetic memory, and I sit in my condo, shouting out answers to the different categories whether I’m watching it with my roommate S, or whether I’m all by myself (I had to explain to her that I always yell the answers out so if she heard me doing that, I wasn’t technically ‘talking to myself’ like a crazy person would. I just think that Alex Trebek will hear me better if I say it out loud).

Anyway, I’m pretty solid on any categories involving literature, history (unless it’s US history), popular culture, science, and general knowledge, but I’m pretty weak on geography (except for Canadian geography). I keep meaning to look at a world map, but then I always get sidetracked by more important things, like laundry, or opening another bottle of wine. The other day, the category was “Poison”. This was the resulting text conversation between Ken and me: 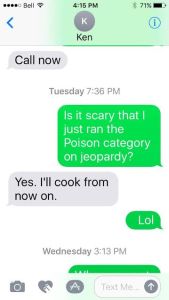 About 6 months ago, I saw an audition notice for Jeopardy!, and I immediately signed up. The audition was online, and you had to answer 30 questions with 15 seconds for each one. I did pretty well, and ended up with a score of 24. But I can’t brag too much because I was pretty lucky with the categories. I took a break from writing just now and went to the Jeopardy! website and tried their online practice test, but this time, there were a lot of questions about US sh*t, country names, and mountain ranges, so I got a much lower score, but then to make myself feel better, I took the College Jeopardy! version and scored almost perfect. So yay me—I’m smarter than a teenager. I was actually on a REAL game show once, a Canadian show called “Definition” which was kind of like Wheel of Fortune but without the wheel OR Vanna White. You played in teams, and you were given clues and then had to solve a fill-in-the-blank puzzle to win. I went on with my brother, who has a PhD., and we actually solved several puzzles and got some amazing prizes, like a rocking chair, two Royal Doulton figurines, and 300 bucks. It was a Canadian game show, remember? Second prize was maple syrup so I think we did pretty well.

But as much as I love Jeopardy!, I really don’t want to go on the actual show, mostly because after the first commercial break, Alex introduces the contestants by asking them questions and they have to answer using a super-cheesy anecdotes:

Alex: So, Marjorie, I understand that you have an interesting collection.
Marjorie: Yes. I collect tortilla shells with the faces of famous people cooked on them. You’d think Jesus would be the most common, but I have several featuring Johnny Depp. The Edward Scissorhands one is my favourite.
Alex: I see. How do you keep them from getting moldy?
Marjorie: Well, a lot of them are from Taco Bell, so they last a while, but I also shellac them.
Alex: So they’re “tortilla shell-ACS”. Very good. You have control of the board.

Alex: So, mydangblog, I hear that you had an exciting encounter with a shark.
Me: That’s right, Alex. I was in Turks and Caicos, canoodling with sting rays, when suddenly someone yelled, “Shark!” Sure enough, there it was. I was all like, “Oh, it’s so cute” but our snorkelling guide was screaming “Get back onto the beach!” And I was like, “Dude—I saw Sharkwater. Sharks are our friends.” I got a good picture of it with my underwater camera before it started coming for me.
Alex: Well, all right then. Sounds like you ‘jumped the shark’.
Me: I don’t know what that actually means, Alex, but OK.

See? I’d come off like a total idiot under the glare of the studio lights and the intense pressure of Alex’s silver-haired gaze. I’ll just keep playing at home, where I can bet $10 000 on Final Jeopardy whether I have that much money or not.

On Thursday after work, I went to look at a condo in my complex. The agent didn’t speak English very well, but told me, “Just go knock door”. Which I did, but it was opened by a half-naked girl. AGAIN. Not the same one who was in the condo I have now when I first went to look at it, but ANOTHER half-naked girl. Is this a Toronto thing, where you take off most of your clothes when you know people are coming over? Anyway, she seemed completely disinterested in me being there and went into the main bedroom, where she sat at a computer in her half-naked state, then began to wander around the apartment like a scantily clad ghost. So I have zero pictures of the place to show anyone, because I was NOT taking shots of the room with this girl in the background, like she came WITH the place or something. I’m still waiting to hear from the real estate agent, because I had to put in an offer (yes, to RENT) and he was having trouble with the paperwork (‘You initial arrow circle checkmark’), and kept sending me new papers to sign every time he forgot an arrow/circle/checkmark. But I’m holding out hope, because the only other unit available in my complex was an absolute dump. It had been empty for a while (I can see why), and the carpets were filthy, the walls were gouged, and the second bedroom had a curtain rather than a door. The best part was when I asked their real estate why the microwave was listed “as is” and she explained that the handle had broken off, but “it still works fine—you just have to pull the door open from the bottom”. My response was, “Well, I’m an adult, so I’m going to pass.” Seriously, for over 2 grand a month, they couldn’t replace the f*cking microwave? Not the landlord for me. The unit I’m waiting on is very nice though, so here’s hoping that girl puts on some clothes, and then I can show you.