At the beginning of June, K went on a bus trip to Washington D.C. She also went to 6 Flags Amusement Park, where she won a life-size, blow-up purple alien. It’s called “Trumbo”.

Me: Oh! You mean like Dalton Trumbo, the American writer and director who was unfairly blacklisted by McCarthy for being a suspected Communist?
K: What? No, our bus driver’s last name was Trumbo.

It was bad enough that half of K’s prom pictures feature her and her assorted friends hanging out with Trumbo, but SOMEONE in the house (Ken) keeps posing him in very human positions, and in very unsettling places. The first time I came downstairs and Trumbo was staring out the window with his hands on the sill was bad enough. Then he was wearing a hoodie and standing by the door, looming over me on the hall tree, or lying prostrate on the floor in front of the door after a “night on the town”. Currently, he’s leaning casually against the couch in the back room. The other day, my aunt was over and thought it was K wearing a costume, that’s how realistic it looks. So, in the near future, if I suddenly disappear, you’ll know I was abducted by aliens. And no jokes about anal probes. I’m serious, Ken. 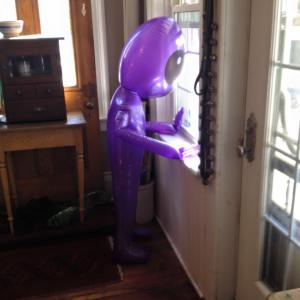