Last week, I got a new tattoo. I love tattoos—I already have five of them, and now that I have Prime TV, I’ve been bingewatching Ink Master, which is a great show with a surprising amount of drama. So I was super-excited to book an appointment with Nathan at New Rise Studio, who’s the son of one of Ken’s former colleagues, and I’ve been following Nathan’s work through her Facebook page for ages. I finally made the appointment with him at the beginning of December for a January date, and just before the glorious day came, we went into lockdown again, postponing everything indefinitely. I finally was able to get the new tattoo done last week and it turned out exactly the way I hoped. And Nathan was very cool and not at all freaky like the last guy I went to, who not only gave me a tattoo but also regaled me about the time he was a Chippendales’ dancer, and told me about his stepson’s sex life.

It might seem weird that I got my own book cover tattooed on my arm, like very narcissistic and whatnot, but I don’t care. I’d originally envisioned something much smaller and less ostentatious but when Nathan showed me what he’d designed, I thought, Why the hell not? 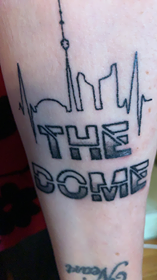 And now my plan is to get ALL my book covers tattooed on me at some point, so I’m literally covered in covers. But that isn’t why I’m telling you this story. No, I’m telling you this as the context for a very misogynistic conversation I had recently, and I couldn’t do anything about it.

This week, I got a call out of the blue to come the next day to a hospital where a surgeon would perform a procedure on my shoulder called ‘barbotage’, which is supposed to break up the calcium deposits in my shoulder and relieve the intense pain I’ve been in for months. You might remember that I had undergone shock wave therapy for the same thing, and I had to explain to several people that it wasn’t electroshock, like they were envisioning me with electrodes attached to my skull a la Frankenstein. The shock wave therapy, despite its hefty price tag (not all of it was covered by our provincial health program) didn’t work, obviously, since the calcium was still there like a rabid little ferret, chewing away on my tendons. I’m assuming that’s what a rabid ferret would do at any rate, as I have no actual experience with either rabies or ferrets. So I went to the hospital and was greeted by the ultrasound technician, who explained that she would use the ultrasound machine to guide the surgeon as he stuck a variety of needles into a variety of places in my shoulder, particularly this long tubular needle that he would use to break up the calcium. “Just to let you know,” she said ominously, “there’s a chance the tendon could tear, or you could get an infection. Also, it will bleed a bit. I’m obligated to tell you that.” It sounded TERRIFYING. But I thought “What would Dave Navarro do?” and I signed the release she gave me.

She left to go get the surgeon and I sat there waiting, almost sick with fear. They came back and after some chit chat (he had a deceptively charming English accent), I didn’t feel any more comforted:

Me: So I heard this procedure has a 90% success rate.
Surgeon: Meh. There haven’t been many clinical studies. It’s probably more like 60%. Fingers crossed.
Me:

Then he draped me and began the procedure:

Surgeon: I’m going to inject you with lidocaine. It will feel like a bee sting.
Me: Let me know when.
Surgeon: It’s already done. You’re okay?
Me: Yep.
Surgeon: Okay, now I’m going to inject your bursa with a local anaesthetic. Are you still good?
Me: I got a tattoo last week. This doesn’t hurt as much as that did, and the tattoo didn’t really hurt.
Surgeon: I’m going to insert the barbotage needle now…So you have a tattoo? My wife wants one, but I told her she wasn’t allowed to get one. And I told my kids that if either of THEM got one, they could find a new place to live.
Me:
Surgeon: How are you feeling? Just a few more minutes.
Me:

Like, what do you even say in response to that? I mean, I had a ton of things I could have said in response to that, but the dude had a giant needle stuck deep inside my shoulder, so I didn’t feel it was an appropriate moment to explain to him that we were living in the 21st century. I mean, could you imagine that kind of conversation at MY house?

Me: I’m going to get a tattoo.
Ken: You’re not allowed.
Me: HAHAHAHAHAHAHA! See ya when it’s done, nerd.

The procedure was quickly finished up—it was nowhere near as bad as I’d thought—and he gave me some aftercare tips then vanished. Right before he left…I still didn’t say anything because what if I have to go back for another treatment? But if I do, I’m going to make sure I see Nathan FIRST.

70 thoughts on “Eye of the Needle”