For the past few days, Ken was at a conference in one of our western provinces, and I had to come home early to take care of Titus, which meant being in the house by myself, something I despise. Even in Toronto, I have a roommate because I hate being alone at night (also, the rent is outrageous and I couldn’t afford to live there without her). When I first moved to Toronto, my condo was paid for by my company because I was on temporary contract, so I didn’t have a roommate, and it was awful. I came home from work every night and literally searched the entire condo, which didn’t take long because it was only 600 square feet. Still, I would call Ken while I looked in the closets, under the bed, and behind the giant column in the corner where only a very thin robber could squeeze. I don’t know what I thought would happen if I actually DID find someone—put Ken on speakerphone and have him sternly order the intruder out? Say “You’ll be sorry when my husband gets here–in two hours”?

It’s even harder at home because we have a very large, late 1800s Victorian house with a full walk-up attic, and searching it would take a really long time. There are 6 doors leading to the outside on the main floor alone, and a balcony door upstairs, although I doubt a burglar would bother climbing up to the porch roof when there are SO MANY DAMNED ACCESS POINTS ALREADY. Before I go to bed, I make sure ALL of them are locked, and that all the outside lights are on. And then I’m locked IN the house, which creaks and makes weird sounds. Oh, it’s not haunted though—I used to live in a house that was haunted and this one definitely isn’t, which is one good thing at least, and if you’re interested in the haunted house, you can read all about it in My Week 69: Ghost Stories.

I was talking to one of my aunts last night, and she hates being alone in the house too.

Aunt: Is everything locked up?
Me: Yes. I double-checked. And I can lock myself in the bedroom now—there’s a hook on the inside of the door.
Aunt: What kind of weaponry are we talking about?
Me: A baseball bat in the bedroom, another one by the toilet in the ensuite, and a hammer on the window ledge.
Aunt:
Me: Too much? I know it sounds crazy.
Aunt: Oh no—I was just wondering why you didn’t mention the pepperspray.
Me: Damn! I left it in Toronto.
Aunt: I keep mine in my bedside table.
Me: Ooh, good thinking.

It’s comforting to know that I’m not the only one in the family who is well-armed.

But wait, I hear you say—you’re not BY YOURSELF; you have Titus. Well, let me relieve you of any delusion you may have had that Titus can be counted on in a crisis. If you’ve read this blog for a while, you’ll know that he has no problem with intruders in the house—our doorstep has been crossed by bats, birds, squirrels, raccoons, and Jehovah’s Witnesses and he has batted nary an eyelash. In fact, the last time a squirrel got in the house, I was convinced it was a burglar, and as I was creeping towards our family room with a giant knife in my hand, trembling with fear, he lay on the living room couch and barely lifted his head when I shrieked in horror at the sight of the tree rat climbing my wall. In fact, the only time he DOES lift his head is when we’re lying in bed all locked in and cozy, and suddenly he pretends to hear a noise and jumps off the bed:

Me: What?! Why are your ears up?
Titus: I thought I heard something.
Me: Like what?
Titus: Oh, uh, like a…hey, open the door and I’ll go see.
Me: Don’t lie. I’m not letting you out of here.
Titus: But I’m bored!
Me: It’s 3 o’clock in the morning!! How are you ‘BORED’?! Go the f*ck to sleep like a normal dog.
Titus: OK, ok, I’ll stay in here. Can you at least put Netflix on?
Me: Fine, but no cooking shows—I don’t want you drooling on the bed.
Titus: Is there any wine left?
Me: What do you think?
Titus: Lush. 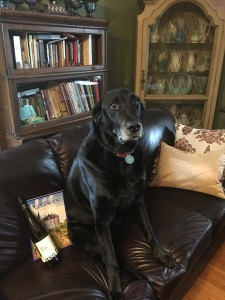 As you can see, he’s not much use in the watchdog department. For all his formidable size—100 pounds of extra-tall black Lab—and intimidating bark, he’s pretty much a big suck. But I’m sure if there WAS someone in the house, he’d be all over them. Especially if they had wine.

Here’s a quick, funny story for you:

Once, when I was teaching, my class was studying Lysistrata by Aristophanes. The students were seniors and it was an academic class, so the kids decided they wanted to act it out. Authentically. If you know anything about early Greek theatre, all the parts were played by men, and they differentiated between the sexes using masks, and because this was a comedy, the ‘men’ were also identified with exaggerated fake phalluses and the ‘women’ with exaggerated fake boobs. So on the day of the performance, the students all dressed up, with the girls taking the male roles and vice versa, just for fun. So there they were, all wearing togas made out of bedsheets, Hallowe’en masks on their faces, the girls swinging long balloons and pool noodles strapped around their waists and the boys strutting with balloons and basketballs tied to their chests. Just as the largest boy in the class said his line in excellent falsetto, “Indeed, I believe I could—I practice the kick-dancing!” and demonstrated thusly, the classroom door opened and my new principal walked in. She stopped and stared:

She left, and as soon as the door shut, the whole class erupted in laughter. I didn’t know what would happen next, but when I saw her again, her only comment was, “It looked like they were having a good time.” I mention all of this now, because I was reminded of it last week when I yelled the word “Herpes!!” across the aisle to a colleague just as one of the big bosses was walking by. She also stopped and stared, and I explained that it was something I was reading. I showed her and she laughed, kind of like “Ah. Ha ha ha” and walked away. Sigh. At least I didn’t say ‘penis’ again.

Catch A Cootie By Its Toe!

Nonsense with a touch of Orange