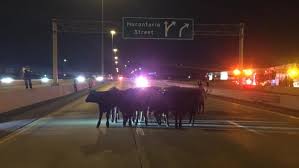 So starting this past Thursday, I am once again working off-site, which means that my morning commute has changed quite a bit. Instead of leaving my condo, going down in one elevator, crossing the street, and going up to my office in another elevator, I now have to drive on the world’s worst highway for an hour and a half. This is an estimate—the time can change depending on the stupidity of other drivers and something that traffic reporters insist on calling “volume”, which is just a nice way of saying there are way too many f*cking cars on the road. I won’t bore you with the details—I’ve written plenty about the Highway of Hell in the past. But Saturday morning’s commute was the worst thing I’ve ever had to do.

It was pouring rain, and it was 6:00 am, so also pitch black out thanks to Daylight Savings Time. I had thought initially about taking the back way, but Ken was listening to the traffic report and there was an accident on one of those roads. It involved a cattle truck. There were cows on the road. Literal cows. Of the Holstein variety. So I had no choice but to take the highway. I knew I was going to have problems about ten minutes into the drive to GET to the highway when it was raining so hard that I couldn’t see the lines on the road, but I thought I would be OK. I was wrong. I pulled onto the on-ramp and was immediately hit by the spray of a truck barreling past. I don’t know how HE could see anything, but he was going like a bat out of hell—a blind bat to be exact. I started driving and thought, “I need to get off this highway now” but I couldn’t see well enough to even figure out where any exits were, and in a horrifying twist of fate, I had left my cell phone at home in the charger, so I couldn’t even do what any normal person would do, which would be to call Ken. So I carried on, hunched over the wheel, terrified that at any moment, I would either go off the road or be hit by a transport truck. I did this for over an hour. In the pouring rain. In the dark.

I can’t even describe how I felt—the closest feeling would be the time that my gas fireplace started making a loud grinding sound and black smoke started pouring out of it, and I thought the house was going to blow up. My knuckles were white, my shoulders were screaming with tension, and I couldn’t even cry because I knew if I did, the visibility would only get worse.

Finally, I got to the convention centre’s access road, and breathed a huge sigh of relief. I pulled into the parking lot, put the car into park, and then, just as I thought my ordeal was finally over, a GIANT F*CKING SPIDER chose that exact moment to swing down from my visor. My reaction was to scream, and then I became convinced that I actually HAD died on the road and I was now in hell. Let me clarify that I don’t normally have a fear of spiders but I was really stressed out and this one was black and hairy and the size of a quarter and I didn’t have any Kleenex to catch it with because at a stoplight 5 minutes prior, I had used the only tissue in my possession, then I rolled down the window and surreptitiously tossed it out onto the road on the grounds that paper is essentially wood fibre and natural and whatnot, and NOT litter, but now I was obviously being punished by the environmental gods. So I grabbed my wallet and tried to whack the giant spider out the window but I missed and it fell off its creepy webstring and seemed to disappear perhaps into my boot, which caused me to scream again and jump out of the car, stomping my feet vigorously because as you all know, if a spider is in your boot, the most appropriate thing to do is crush it into your sock, because why the f*ck wouldn’t I want a spider corpse in my boot all day? But when I took my boot off, there was no spider, which means it’s still hiding somewhere in my car.

So to make a long story short, I need to buy another car.

And now, to relieve the tension, here’s something a little more funny. As I was getting dressed this morning in the dark, I tried to turn on my closet light, but I was too tired to do the dance properly. I hit the closet light with a pair of underwear to activate the motion sensor, and remembered something I wrote a long time ago, which will explain what I mean by ‘dance’:

One Friday night, I came home from Toronto. I went into the walk-in closet to get changed, reached up to pull the chain on the light to turn it on, but couldn’t find it.

Ken: The chain broke this week.
Me: How do I get the light on then?
Ken: I installed a motion detector light bulb.
Me: But I’m IN the closet. Why hasn’t it come on?
Ken:  You have to come out of the closet. Now walk to the right, along the side of the bed. Now walk to the left and move towards the bathroom door. Take two steps forward, then hop one step back on kind of an angle.
Me: What?
Ken: You did it wrong that time. Try it again. This time, make it more of a 30 degree angle instead of a 45 degree angle.
Me: Can’t you just get another chain?
Ken: No, this is much better. Oh, by the way, when you’re finished, you have to shut the closet door. If Titus walks past, he triggers the light and it will wake you up.
Me: I didn’t realize Titus could do Country Line Dancing.
Titus: Pivot, Turn, and Quick-Ball Change! Yeehaw!
Ken: You’ll get used to it.

Ken was right. Now, if I want the closet light on, I just hum “Achy, Breaky Heart”, the magic takes over, and it’s all good.