I am sometimes awkward at work

Anyone who knows me (or visits this site frequently) knows that I can be a little awkward around other people. I quite often misinterpret the things other people say, mostly because in my head, life is like a Monty Python sketch, which is to say it’s weird, and funny, and quite often self-referential, like if you haven’t watched the show before, you might not understand the joke. For instance, the other day, I was going through some materials with a co-worker, looking for common patterns, when another colleague walked in and asked, “Have you found anything?”

“Well,” I answered, “it could be something, or it could just be a case of a million monkeys with a million typewriters.”

“Writing the bible. Right,” replied my colleague. And I so badly wanted to say, “Ah, you’ve seen this episode before,” but I didn’t, because that would be pushing my luck. And also, I wanted to hug her, because mostly when I say that, people think I’m either obsessed with monkeys, or don’t like the Bible. Not that I actually LIKE the Bible—I’m kind of ambivalent towards it, like if I was to review it, I would probably say something like “Choppy style, but interesting plot. A little too preachy for this critic. 3 out of 5 stars.”

Anyway, recently I got promoted, so I’ve gone from being able to wallow in my comfort zone to being right out there in the spotlight. And it’s hella uncomfortable. In work situations, I normally like to sit and listen, just observe, and I only say something if I think it’s important. In my head, I like to think I’m perceived thusly: “She doesn’t speak very often, but when she does, we all should listen.” Unfortunately, the reality is probably more like, “What the hell is she talking about NOW? It’s always monkeys, monkeys, monkeys.” 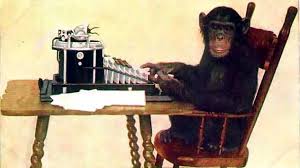 But since the promotion, when I’m in meetings, instead of just being able to sit there, listen, and make notes, I’m REQUIRED to speak. And it’s usually when I least expect it.

Director: And then the 4th quarter targets….
Other Director: The memo about this requires a decision note…
Chair: And now for a report from mydangblog.
Me: What?! I…We are an EFFECTIVE team.

You can tell that I was lost in thought, going through Tom Cruise movies in my head. Thank goodness I was stuck at Oblivion, and not Jerry McGuire, because “Show me the money!” might not have gone over as well. (Just for the record, they don’t actually call me ‘mydangblog’ at work, but it would be super-funny if they did.) And the other day, we were having a high up meeting, and we were told not to let people into the office without escorts, because it IS a secret agency, and there are a lot of confidential materials in the office that are not for the public’s eye. “In fact,” said one of the Directors, “this came about because last week, we discovered that a former employee was in the office, and no one knew about it.”

Me: What?! You mean, like, for days? Was he hiding somewhere? I KNEW we needed to clean up that storage room!
Director: No. He was only here for a couple of hours. He wasn’t hiding—he just wasn’t being escorted by the person who let him in.
Me: Oh, good, because otherwise that would have been REALLY disconcerting.
Director: Yes. Sigh.

Now that I’m a manager, I’m also responsible for a budget. And it’s a HUGE f*cking budget. When I was a high school department head, my total budget was $12 000, and I was responsible for every penny. I had an Excel spreadsheet with two columns: ‘What I Have’ and ‘What I Spent’. My only job was to make sure that ‘What I Spent’ was never more than ‘What I Have’. When I first saw my new budget, I was completely freaked out, and my first thought was, “I’m gonna need a bigger spreadsheet.” So I asked to have a meeting with the Manager of Finance:

Me: So I’m a little concerned about how I’m supposed to keep track of all this.
Finance Manager: Keep track?
Me: Well, there are over 200 budget lines with like another 500 sublines. Does the spreadsheet you sent me automatically calculate debits or do I have to do that manually? I think I should probably pin the calculator to the task bar if that’s the case, cuz this is gonna take a LOT of time.
Finance Manager: Uh, no. This is just ‘for your information’. We have a whole department that deals with budget calculations.
Me: Oh. OK. Cool.

And speaking of cool, the person who had my office before me had a big-ass fan. Me, I’m always cold, so I haven’t used it yet, but last week it was getting pretty hot, so I decided to turn it on.

And finally, the coup de grace of my awkward week:

I work with a very nice gentleman about my own age. On Wednesday, I was having trouble with my computer, so I went over to his desk. He’s lucky, in that he has a window, but also unlucky, in that it looks right over into the highrise building next door. I was in the middle of a conversation with him when this happened:

Me: So are you having trouble with your drives? I can’t get anything to load.
Very Nice Gentleman: No, mine seem–
Me: Holy sh*t! There’s a girl in that window and she’s completely naked!
VNG (clears throat): Oh, gosh. Anyway–
Me: No, seriously. Good lord! Okay, now she’s putting on underwear. Doesn’t she know we can see her?!
VNG: Um, I actually can’t from where I’m sitting. So, have you tried restarting your com–
Me: She’s right there! Just stand up a little bit!
VNG: No, that’s OK.

So I stood there for a little while longer until the girl was dressed and gone. It wasn’t until later that I realized that the poor guy was probably mortified and all like “Can’t we just talk about monkeys?!” And now, I feel terrible for trying to make him look at naked ladies . But probably not as terrible as the girl would be, if she knew that she can be seen in all her glory from our office windows.

Right now, I’m going through resumes for a position I’m hiring for. The one notable thing is that people really go a little overboard with their superlatives. Either that, or they REALLY want to work with me. I started making a list of things that people say that will not get them a foot in the door. First, there are the people who are ‘delighted’ to be applying for the position. These people are also possessed of ‘great enthusiasm’, as well as ‘great eagerness’. Then there are the people who are ‘extremely knowledgeable’ and are ‘highly adept’. Finally, there are those who tell me that ‘As you can see’, they will be an ‘excellent addition’ and a ‘valuable member’. Then I got the feeling that maybe they all thought they were applying for a position as “puppy petter” or “ice cream truck client”. I mean, my office is a great place to work, but it’s no kitten farm, so dial it back a notch, Skippy.

I was on the train Friday night, and we were sitting in the station waiting to depart, when the guy in the seat across the aisle from me suddenly starting talking VERY LOUDLY to someone on his cellphone. It was his bank. He was angry because he had paid for something by cheque from his line of credit which he rarely did, and he was charged a service fee, which he had NEVER been charged before. Then he gave the person on the other end his account number and the answer to his secret question, AND the dollar amount of the cheque, which was $2, 226.00 and I was like, “That service charge must have been huge for him to do this in front of everyone”, and also “I could totally hack his account”, at which point, he said, “It was twenty-five cents. I don’t understand why I’m being charged to use my line of credit. I want it credited back to my account immediately.” I actually snickered out loud at how serious and pissy he was. Then the train left the station and he was quiet for a while, so I assumed the bank’s customer service representative told him he was silly, and to go away. But suddenly, after about 10 minutes, I heard him say, “Yes,” and I realized he was STILL on the phone. Then he said, “Thank you. I hope this never happens again.” I just love that the customer service rep. kept him on hold for so long, hoping that he would hang up. Yet, he persisted.