Last week, I was looking at Facebook, and someone had posted an article about one of the many Kardashian creatures and her apparent OCD. The Kardashian in question is “Kloe”, and maybe she thinks she has OCD, but I took one look at her refrigerator and freezer, and I was like “No. Just no.” Because her refrigerator and freezer made MY OCD flare up like fireworks on Victoria Day. First, her refrigerator was JAM-PACKED full of stuff. And maybe it was organized by type, but the pickle jars were all squished up against each other (who the hell needs 6 jars of pickles anyway), the salad dressing was nestled up against the mustard, and there was no satisfying equi-distance between ANYTHING. But the worst part was that there were 6 butter sticks which were NOT stacked evenly, and the margarine tubs were on a tippy, nay, haphazard angle. Lady, just because you have six cans of Red Bull lined up in a row doesn’t mean anything other than you’re probably more wired than most people. Also, the sheer amount of stuff in that refrigerator mostly proves you’re some kind of self-indulgent shopaholic with more money than brains. Then I read on about how she takes several boxes of Oreos and tosses them into jars. Jars! You’re taking Oreos out of their neat straight rows and dumping them willy-nilly into glass containers, where the cookie dust gets all over everything. And what if some of them break in the process? Now you can’t even eat them.

So I was irked. My own OCD isn’t even that bad on most days—in fact, you might not even notice it, unless you look around my house and realize that all objects of décor are organized in patterns of fives (and sometimes threes or sevens), or you’ve watched me put groceries on the conveyer belt in a symmetrical fashion according to size and shape and with one inch of space between all items, or you’ve seen me in the bathroom washing my hands simply because doing that fills me with a sense of profound relief, or you’ve noticed that my thumbs are bleeding because my dermatophagia (which thank goodness is limited to my cuticles) is out of control right now and I’m not sure why.

Ken barely notices my own ‘quirks’, but a couple of weeks ago, it became VERY apparent, when I came home from Toronto and went into my bathroom: 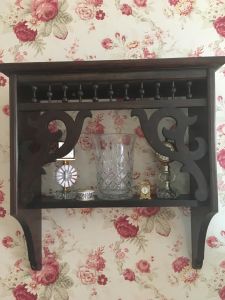 The “she” in question was our new house cleaner. Now, before you start lumping me in with the Kardashians, like I have so much money that I can afford a maid, let me clarify that she only comes in once every two weeks, just to do the basics. With me in Toronto all week, and only seeing Ken on the weekends, the last thing we wanted to do was spend all day Saturday cleaning the house. Plus, I have to write, and dusting gets in the way of that. Obviously, a dirty house is a problem for me, hence hiring someone to help out. The cleaner is young and relatively inexpensive, but also apparently oblivious to the order of things. The first week that she came, she had left the cupboard in the kitchen in total disarray, causing me to have a small breakdown. “She moved EVERYTHING!!” I cried to Ken. He kindly suggested I get out the photographs so that I could put everything back. Yes, photographs. I take photographs of the way I’ve arranged things so that I know how to put them back, just in case. It’s especially helpful at Christmas, when I want to place ornaments in the exact same position as the year previous.  So I spent a good hour putting things back where they were supposed to be. Now, of course, I’m used to the fact that every other weekend, I’ll come home to subtle disarray, but there’s also some stress-relief involved as I re-order my world and then stand back and admire the renewed symmetry.

I think a big part of the problem is that I don’t like strangers touching my stuff, so hiring a stranger whose sole job is to touch my stuff was bound to be a problem. One that I’m slowly getting used to. But this past weekend, Ken and I had a garage sale, so you can only imagine how high my stress level shot up, as stranger after stranger wandered around my yard, picking up things and putting them down in different places than the ones I’d assigned to them. It took all I had not to follow people around, re-arranging behind them, or not yelling, “If you don’t want to buy that, can you please put it back where you found it?!”

Plus I hate how judge-y people are at yard sales:

Seriously. An antique side table worth 5 times the price and she passed at $20 because the legs were a little “rickety”. What, was she planning to sit on it? Otherwise, it was just fine as a table. But we did sell a lot of stuff, including Frank the stuffed fish whose story you can read about in My Week 34. A woman came very early, and bought a lot of things for exactly the price we were asking and never haggled once. She admired Frank, who we’d pulled out of the shed to put by the side of the road on the grounds that neither of us REALLY wanted a dead fish in the house, so I told her she could have him for free. She loaded all of her purchases into her car, then suddenly she came back to the house. “Here,” she said, holding out a $10 bill. “That’s for the fish. I know he’s worth a lot more.” When we protested that no, she could just have him, she insisted, and tucked the bill into a glass on the table. “Don’t argue,” she laughed, and then drove away.

The other best part of the morning was when my aunts came for a visit. After looking around for a while, one of them asked if she could dig up a little bit of Solomon’s Seal from my garden for hers. They both disappeared for a minute, then my other aunt came around the corner of the house with the plant hanging out of a bag.

“Hey,” I yelled. “That crazy woman is taking plants from the garden!! Lady! Those aren’t for sale!!”

Then I realized that some of my prospective customers were looking at her, as she blithely made her way to the car. “Do you want me to stop her?” one man asked, concerned.

“No,” I laughed. “She’s family. It’s all good.” Because family is ALLOWED to touch my stuff.