Personally, I’m getting a little tired of always being on camera. I don’t mind meeting with my immediate team because they already know I’m wacky, but I think other people are quickly realizing that I’m more quirky than they thought. Last week, I was in a virtual meeting with our CEO and some other directors, and the CEO told us that she used to do psychological testing to determine intelligence and that the first question she would ask was “Does the sun set in the east or the west?” And if you know anything about me at all, you know that I’m directionally challenged and hold tight to my belief that North is up, South is down, and that East and West are randomly ‘out there somewhere’:

In fact, the only direction I have ever been able to follow accurately is ‘twist cap and pour’. Anyway, we were at this meeting, and when she asked if the sun set in the east or the west, I was completely befuddled because I COULD NOT REMEMBER and did I ever really know the answer to that in the first place? I mean, I’m a wealth of trivia and regularly run numerous categories on Jeopardy except for Geography, but I thought to myself, “If this is an indication of how intelligent I am, I should know this!” so I started thinking really hard, and using my hands to track the course of the sun across the sky and doing vigorous mental calculations while the meeting continued on, and I had almost figured it out when I realized that one of my colleagues was trying not to laugh, and I don’t know if it was at ME or maybe she didn’t know the answer either. And then later that day in another meeting, I was listening intently as one should when suddenly, a fruit fly started dive-bombing my face and I did what any normal person would do—I started clapping my hands together in the air, trying to kill it but it was very quick and agile so it took several attempts and it wasn’t until it had been handily dispatched that again, I realized the same woman was silently laughing. And I will never know if it was at me or not, because when you’re in a Zoom meeting, EVERYONE seems to be looking right at you because they’re looking at their cameras, and now I think the best indicator of intelligence is whether or not you have your camera on during large meetings.

Also, my camera doesn’t add ten pounds, it adds ten YEARS and whenever I look at myself on the screen, I seem older, sadder, and much paler than I do in real life (at least I hope I don’t look that old, sad, or pale), so you can understand why I’d rather not be on screen.

(Ken just interrupted me to tell me that he caught a mouse in the live mouse trap he had put in the cupboard under the sink. We have a very old house, and every once in a while, one gets into the cupboard. I’ve named him Franklin. Ken’s taking him over to the park where he can frolic with the other field mice.)

Anyway, having to do all interactions, social or otherwise, on camera is getting a bit ridiculous. I’ve been having terrible shoulder pain, so my doctor (who called me on the phone), told me to get some physiotherapy. I called the clinic and they were only doing “virtual appointments”, which meant that I met with a physiotherapist using a type of Zoom.

Physio: Can you point to where the pain is?
Me: Here, here, and here.
Physio: Can you get a little closer to the camera? Like put your shoulder right up to it?
Me: Sure. Is this better?
Physio: A little down to the right. OK. Now, can you swing your arm like this? Hang on, let me just move further back so you can see what I’m doing.

And so it went. She was very nice and emailed me a PDF of exercises I could do, which haven’t helped at all because what I really need is acupuncture or a good massage, neither of which can be accomplished VIA ZOOM. The one thing that IS helping slightly is the new hot tub which is working quite well. The set-up was much more complicated than it needed to be though, mostly because the instructions were like the worst set of instructions I’ve ever seen, and most of them were just links to videos where you could watch a very young girl wearing a very fancy dress perform different aspects of the set-up. Here is a page from the manual that shows you all the parts in the box but doesn’t identify them by name, just by part number. And they are all the same scale, which makes it even more fun to figure out what they are:

This is my favourite page, where it explains what all the functions are the control pad are for: 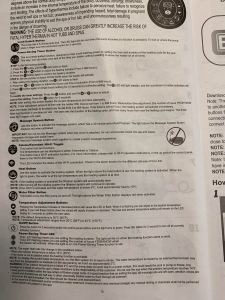 Notice that they are so small that it’s almost impossible to read without a magnifying glass. In fact, the only thing you CAN read on this page is the warning, in all caps, that the use of alcohol or drugs can greatly increase the risk of fatal hyperthermia, prompting Ken to exclaim triumphantly, “Now I don’t need to build that tiki bar you wanted!” and I was like, “Just put a damn roof on the gazebo and we’ll call it a day, OK?!”

But we finally got it up and running, and it was fantastic:

Me: I love this. It’s so nice to just sit here in the warm, bubbling water and watch the sun set in the…
Ken: West.
Me: Right.

(Ken just got back from the park. He said Franklin scurried off into the high grass without so much as a backwards glance. Live long and prosper, my little rodent friend.) 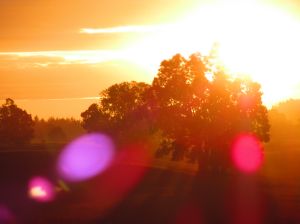