Well, it’s Thanksgiving weekend here in Canada, and I’m grateful for many things, not the least of which is no longer having a strange man taking up residence in my kitchen. “A strange man?” I hear you say. “How intriguing!” Let me assure you that it was not. Here’s the story:

A few weeks ago, I got sick of looking at how worn my kitchen cabinets looked. They’re painted white but chipping everywhere because the original owners of the house didn’t get them properly primed. The cost of replacing all the cabinets was astronomical, so we hired a company to paint them. Enter Mike, he of the numerous tattoos, faux-hawk, effusive personality, and, despite him being the same age as Ken and me, numerous children under the age of 5 who kept him “running around like crazy”. Mike assured us when we signed the contract that in 3 days, with his spray technology and oil-based lacquer, we would have “a brand new kitchen.” But on the night before he was due to start painting, he called to tell me that he had come down with shingles and was running behind schedule. Bear in mind that we had to take every single thing out of the kitchen to prepare for the spraying and the house now looked like a disaster zone:

Me: I’m so sorry to hear that.
Mike: Ya, it’s super painful. Worst pain I’ve ever experienced and I’ve broken every bone in my body,
Me: Wow.
Mike: Ya. And if I can be honest with you, I MANSCAPE, and let me tell you, it hurts like hell.
Me:

And I don’t know what it is about me that compels people to tell me very private things, things that I really don’t want to know, but it happens all the time

Like the tattoo artist that Kate and I went to (my fifth tattoo—the Tree of Life, and her first, a cool graphic she designed herself). It was a reputable parlour, but the artist himself was a little off kilter. My appointment was before hers, and the tattooist, a very short man with a slight build, regaled me with stories about his “Chippendales dancing days”, where he claimed that he “didn’t have a great body like the rest of the guys”, but he “had the best moves”. I was like “Uh huh” and silently begging him not to demonstrate. Then when he was tattooing Kate, he launched into this gem:

Tattoo Guy: My sixteen-year-old stepson just got his first girlfriend.
Me: Oh, that’s nice.
Tattoo Guy: Yeah, I found a condom wrapper on the floor of his room.
Me: Gosh.
Tattoo Guy: So I said, “Where did you get a condom from, anyway?” And he said, “I found it on the path.” So I told him, “NEVER use a condom that you found on the path.”
Me: Words to live by, that’s for sure.
Tattoo Guy: I know, right?

Then there was the last time I went to the dentist. I’ve been going to the same dentist for years, but I didn’t realize that they have a completely different staff on Saturdays. The receptionist WASN’T Nina, for starters, although the Saturday receptionist seemed quite nice. But when the hygienist, Cindy, came out, I became more suspicious. “Where’s Serenity?” I asked. Let me just tell you that Serenity has been my hygienist for many years. She’s a lovely woman, and completely suits her name. We like all the same TV shows, and she has a wonderful knack of carrying on a two-sided conversation about Sons of Anarchy or Better Call Saul with me, even with her hands in my mouth, kind of like this:

The new, unfamiliar hygienist said, in a very bubbly voice, “Oh, she’s on her honeymoon. But she doesn’t work Saturdays anyway.”

Well, all right. Cindy seemed very professional and competent, so I decided to give it a go. I got comfortably seated, and then the deluge began. By the time we were done, I literally knew EVERYTHING about Cindy’s life: where she went to high school, how she met her husband, his career ups and downs, their respective families and where they all lived…she was very entertaining, and the appointment just flew by. I don’t think she actually took a breath for 25 minutes. But the best part was this:

“So my husband lost over 80 pounds in the last year. I’d known him for so long that the weight just crept up on us, then one day, he decided to lose 30 pounds, but I think he got addicted to weight loss because now he’s really thin and worries about his skin flaps but I just keep telling him to tone up and not worry about the weight. He ran his first marathon last year. The only thing is that I REALLY like to snack and I NEVER gain weight, but if there’s snack food in the house, he’ll binge-eat it all so I have to hide it. I had this really great hiding place in the baking cupboard, but somehow he found it and ate everything and I know he MUST have been looking for it because why would he be in the baking cupboard since he never bakes, right? So then I was hiding all my snack food in the car, but now it’s getting too warm and I’m worried things will melt or go bad. So the other day, I found the perfect spot, and if he finds it, I’ll KNOW he’s been deliberately looking, because I put everything in a TAMPAX BOX IN THE GUESTROOM BATHROOM. If those chocolate bars disappear, I’ll know he was searching the house for food, because why would he want a tampon, right? My only worry is that I might have a girlfriend staying over and she might need a tampon, and then she’d be like, “Is this what you’ve been using? How does THAT work?”

I didn’t know who to feel more sorry for—her, her poor snackless husband, or the unsuspecting house guest. At any rate, I was laughing so hard that I barely felt my gums being ripped open by the assortment of picks in her arsenal. And I had no cavities. Yay me.

As for the kitchen, despite Mike’s promises, he didn’t finish until end of day Friday. The cabinets look great, all fresh and white. Some areas of the walls are also white, as is the perimeter of the ceiling and a lot of the window panes because the one thing Mike DIDN’T tell me was that he was an indiscriminate sprayer. Which, I suppose, I should be grateful for. 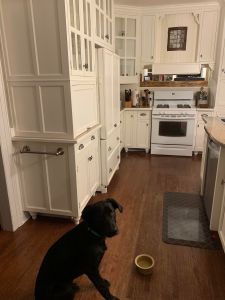 And please don’t feel sorry for that sad-looking puppy. He just ate, and thinks if he pushes his empty food bowl into the middle of the floor, someone will feed him again. He’s such a little trickster:-)

63 thoughts on “Thanks For Sharing”