The other day I was having a conversation with a friend who had posted something on the Twitterverse about HSP, which stands for Hyper-Sensitive Person. We were going through the list of criteria, and I have to admit that as I’ve gotten older, I’ve developed a couple of the symptoms. For example, I hate loud noises. More specifically, I hate vacuum cleaners. Hate is maybe too mild a word. Vacuum cleaners make me want to gouge my eyes out, to the point that, a few years ago, I bought a Roomba. For those of you who don’t know what a Roomba is, it’s a very expensive robot vacuum. It’s not a badass robot with laser beam eyes and super-strength, but it WILL vacuum your carpet when you’re not at home which, at the time, SEEMED pretty badass. It was perfect for me, because that meant the rugs got cleaned but I didn’t have to suffer the torment of listening to it. Things were great for a while—I would put it in the middle of a room, turn it on, then run out the door, leaving it to its robotic devices. Then, inevitably, Ken decided that he was now in charge of the robot, like an evil robot slave master. And he insisted on running it when we were actually home. What’s the f*cking point of THAT? You might as well just use a regular, non-sentient vacuum. I would be in my bathroom, and suddenly the Roomba would grind in, like the Texas Chainsaw Massacre was about to happen. This is not an exaggeration—one time, it actually attacked my feet and I ran away from it. But then it kept coming after me, and it was like one of those horror films where, no matter how fast you run, the killer just keeps on relentlessly coming and eventually catches you. I finally resorted to kicking it away when it would cruise through the room I was in, until finally, it died. I have no regrets. It was evil and alive—it was either kill it my damn self or call in a priest. Ken was sad—he loved his robot vacuum, but that’s the way things go when you want to act like a petty despot—robots get hurt.

Aside from my bizarre hatred of vacuums, here’s another reason why I might have become more sensitive as I’ve gotten older. Apparently, people who are hyper-sensitive always remember everyone’s birthday, because they get very upset with themselves if they forget. Now, for a long time, I was NOT the kind of person who wrote down important milestones in a little diary. I have, on numerous occasions, forgotten the birthdays of my parents and siblings, forgotten my wedding anniversary, and regularly get Kate’s birth year and the year I got married mixed up. But over the last couple of years, particularly after discovering how to use my Outlook calendar, I’ve gotten much better at this, at least for work. Last year, I decided to make sure I remembered all the birthdays of the people on my team. But first, I had to find out when they actually were so that I could record them in my calendar:

Me: Hey, can you do me a favour? Can you go around the office and get the birth dates of everyone on our team?
Colleague 1: What do you want them for?
Me: So I can put them in my calendar.
Colleague 1: Why don’t you just ask them?
Me: I don’t want people to think I don’t already know when they are.
Colleague 1: I think people already know that. You always seem really surprised when there’s cake.

But now, I have them all recorded, and even though we can’t have cake because we’re all working remotely, I have a JibJab account, and I can whip up a card at a moment’s notice, as I almost had to do the other day:

Colleague 2: So, yes, I think that would be a good time to meet about–
Me (looking at Outlook calendar): Oh my god!
Colleague 2: What’s wrong?
Me: It’s Donna’s birthday today! How could I not have seen that? Why did nobody say anything? What time is it?
Colleague 2: Five to 1.
Me: I’m meeting with her and the team at 1! That gives me five minutes. I need to go—I have to make a Jibjab for her!

But then, as I was frantically looking for a JibJab card template that I hadn’t already used (I think ‘Tequila’ has run its course), I happened to look at my calendar and realized that it was set on October, so I texted my colleague, who had already texted Donna to wish her Happy Birthday, to which she had replied in confusion, “It’s not my birthday” to which my colleague then replied, “Sorry, wrong person” and I think we both recovered nicely from the situation. 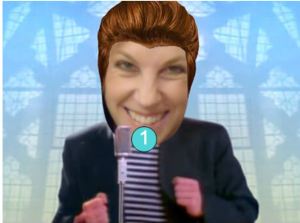 Also, I’m trying to improve at writing messages in cards. Just like my poor small talk skills, I’m equally bad at card small talk. Some people are capable of writing epic messages, like “He was gone before his time—remember the best parts of him as a tribute to his memory”, or “A happy marriage is a gift from the heavens—you are truly blessed.” Me, I learned a long time ago that I am NOT epic, and I usually just resort to “So sorry for your loss”, or “Congratulations”. Once, I had to write a Thank You card but instead of “We make a good team”, I wrote “We make a good time”. Then I got worried that the person might think that it was some bizarre pick-up line, and I got totally paranoid and ended up throwing the card away, because there was no way to correct THAT, except to start over again. Which is why I like JibJab cards, because you can proofread them before you send them. Still you have to be careful:

Kate: What are you doing?
Me: Making a card for my team. Look, it’s a song called Cake By The Ocean. Nice huh?
Kate: Uh…you might want to reconsider that.
Me: Too sensitive, given the whole covid thing? Because we can’t have the birthday cake at the beach right now?
Kate: NO, because “cake by the ocean” means having SEX at the beach.
Me: ‘Tequila’, it is!

I’m nothing if not sensitive. 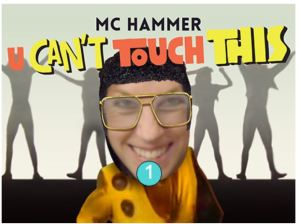