Every so often I buy a lottery ticket. There are several different lotteries here, and the prizes are starting to get really big, so I figure, Why not? I mean SOMEONE has to win, and what are the odds that one day I might? Pretty astronomical actually, but still, a girl can dream. And the best part is that you don’t even have to wait to find out if you won because there’s an app you can download onto your phone that lets you scan the barcode on the ticket and find out almost right away, which completely satisfies my need for instant gratification. Like, you know those obnoxious scratch tickets with 3 separate play areas that advertise themselves as “hours of fun”? All you have to do is scratch the barcode, scan it, and you’ve saved yourself a hell of a lot of time, which is a win all on its own. Also, because Canada is a bilingual country, if you DO win, you’re told by a very excited woman’s voice in both official languages, and I think it’s some kind of Pavlovian thing that if an Ontarian ever hears someone say “Winner!”, their immediate and automatic response is “Gagnon!” If you don’t, you’re a spy or an alien or an alien spy or whatnot. 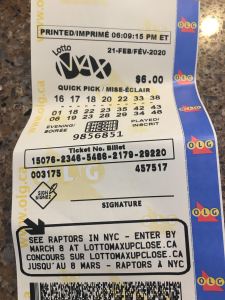 But as I was scanning my ticket last weekend, I discovered something interesting. As I was waiting for the results, I realized that I was pretty sure I was going to win, and when I didn’t, I was genuinely disappointed, like What? Really?, and that I feel that way EVERY SINGLE TIME. What does this mean? Is this the true irony of my life that I, the Queen of Worst Case Scenarios is, at heart, an eternal optimist? That the woman who has mentally laid out, in painstaking detail, plans to survive bear attacks, bouncy castle misadventures, high speed train derailments, cars plunging off bridges into icy water, and thousands of other potential disasters, is secretly convinced that there is a BEST CASE SCENARIO?

(Side note: Speaking of Worst Case Scenarios, the other day some of us met with a group of people who came to the secret agency to do some research. They started by going around the table and telling us who they were and what their backgrounds were. It went like this for the first 5 people: Accountant, IT Support, Accountant, Business Analyst, Programmer. Then the last person, a man who looked about 25, said, very casually, “Before I came to Canada, I was a Colonel in the army, responsible for training other military units in confirmation and identification of biological warfare agents as well as combatting potential nuclear strikes.” There was a pause, then I said, “OK, this guy wins.” Everybody laughed except me, because I was IN AWE, and also if I was single and about 25 years younger, I would have dropped to one knee and proposed right then and there.)

But back to my point—if anyone remembers what it was. Oh right—I’m always certain in my heart of hearts that I’ve won the jackpot, and when I haven’t, I console myself by saying, “Next time” and “What would you do with 50 million dollars anyway? It’s just too much for one person.” But that is, of course, bullsh*t. I could very easily enjoy that much money, and could find numerous things to spend it on. Once, Ken and I were talking about winning the lottery:

Me: If I win the jackpot, I’m buying a helicopter to take me to work. F*ck the train. I could get there in like 15 minutes by helicopter. The only problem would be where to land.
Ken: If you won the jackpot, why the hell would you keep working?!
Me: Ooh. Good point. Can I still buy a helicopter?

One of my friends at work has an article pinned up in her cubicle about a woman who won millions of dollars and the headline is the winner saying, “I’ll Keep Flying Economy”. And my friend was like, “See? People like that don’t deserve to win the lottery. If you’re not going to change your life AT ALL, you shouldn’t be allowed to keep the money. There should be a quiz, only instead of a skill-testing math question, you should have to describe the things you’re going to do to make life better” and I was like, “There’s a F*CKING MATH QUESTION??!!”

Still, I agree with my friend. If you’re not going to at least fly first-class and sleep in one of those cool pods, you don’t deserve the money. Stop being all humble and sh*t and just go around screaming “I’m rich!!” I’ll be checking my lottery ticket from last night very soon, and I’m pretty sure that’s what I’m going to be writing about next.

Update: I just checked my ticket and you won’t believe this!……

……I just found out that the word “acai” is actually pronounce “ass-eye-ee” and if that isn’t something to giggle about every time I see a bottle of Blueberry Acai Vitamin Water, I don’t know what is. Also, I didn’t win the lottery and I’m really shocked. But there’s always next time.

Oh, by the way, I found out a couple of days ago that a site called Feedspot has my blog listed in their Top 100 Humour Blogs, so thanks Feedspot! I’m currently number 93 but that’s better than not winning the lottery.

58 thoughts on “Ever The Optimist”