Last week at work, we were talking about the upcoming holiday season, and a couple of people referenced the new Christmas ‘tradition’—the Elf on a Shelf. This merry little fellow is a posable doll, dressed in a red and white elf costume, which can offer hours of fun for parents, and apparently hours of terror for children. Every morning, the child will get up and find the elf in a new position, having done something clever or naughty during the night. And during the day, there is the reminder that the elf is “watching over you” from somewhere in the house. This, from what I gathered, allows parents to apply leverage to their little ones ie: “You’d better behave—Marcel (or whatever name the parents give the tiny spy) is keeping an eye on you, and if you don’t stop poking your sister, he’ll tell Santa in his daily report!”

While this may sound cute and festive on the surface, it has really insidious undertones. Isn’t it bad enough that “Santa” already knows when you’ve been “bad or good”, sees you when you’re sleeping, and knows when you’re awake? At least Santa is at the North Pole, and might be too busy to constantly monitor whether or not you fed all your vegetables to the dog. But now, there’s a creeper in your own home, who stalks you every minute of the day and reports back to the Big Guy for even minor infractions like colouring outside the lines or drinking straight from the carton or whatever. And there are hundreds of websites devoted to sharing things that people can do with their elves (and quite a few are NOT very PG 13). I took a look at some of them and here are the more disturbing places that the Elf on a Shelf can be found:

1) In a Nativity Scene: These irreverent parents replaced the baby Jesus with their elf, named DJ. He towers over all the other figures like a jolly, stocking-capped god. The shepherds look terrified, and the Wise Men look pissed off, like “We came all this way for that?” Mary just looks confused. 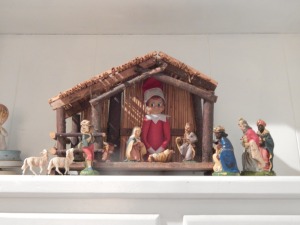 2) Trussed up in a toilet paper roll, wrists tied together, and hanging from the shower curtain rod, having been gagged with what looks like his own collar. This might be the first clue that your parents don’t really like the Elf on a Shelf—or that they’re serial killers.

3) Lying in a drunken stupor on top of a picture frame, after having used black marker to draw devil horns and tails on a family portrait. What kind of behaviour are you trying to role model here? Satan worship or vandalism? And then you wonder why, ten years later, your teenager is playing records backwards and spray painting the neighbour’s fence with pentagrams.

4) Reading the Bible: Not that reading the Bible is disturbing, but it kind of sends a mixed message. Does God have elves or angels? Plus it adds another layer to the paranoia you’re creating in your child. Now the little tyke is being watched by the Elf, Santa, AND GOD. I would just lock myself in my room and never come out.

5) In the hot tub, with a couple of Barbie Dolls: He looks REALLY happy. Maybe because all the Barbies’ hands are under the cellophane water. “Daddy, what are all those ladies doing to Buddy?” “Don’t worry, honey—they’re just jingling his sleigh bells.”

There also seem to be a lot of pictures of the elf defacing walls with crayon, gorging on maple syrup and candy, writing on mirrors, squeezing out toothpaste all over the counter, pooping out Hershey’s Kisses, and writing messages in spilled hot chocolate powder, which makes me think that parents are having way more fun with the Elf than their kids are. Sure, sure, I know that kids get really excited about ANYTHING to do with Christmas, and probably get a kick out of the Elf to a certain extent, but it’s all just a little too Orwellian for me, like the Thought Police have invaded Christmastown. If we really want to draw an analogy to 1984, then Santa is Big Brother, the Elf on a shelf is O’Brien, your child is Winston Smith, and your house is the Ministry of Love (which sounds like a very nice place, but that’s where all the torture-y stuff happened, in case you never read the book). Do you really want your children to wake up Christmas morning chanting, “2+2=5”? Santa was always good enough for me, cuz I loved Big Brother.

Eventually we’ll just blend Hallowe’en, Black Friday, and Christmas all together into a new festival called “Overconsumption”, where adults wearing elf costumes fight to the death in a two-month long tournament to win candy, toys, flat screen TVs and vegetable steamers for their kids. Overall though, I guess if you want to do the Elf on the Shelf thing with your kids, play up the fun, and tone down the fascism. And the sex. That’s my advice.

(As a side note, I would never have an Elf, but I DO have “Sock Monkey in the Wine Frig”. His only job is to make sure no one steals my wine.)

Memoirs of a Wannabe World Traveller

“The world is a book and those who do not travel read only one page.” – St. Augustine

Happiness Between Tails by da-AL