This week has been an interesting one. Tell me all about it, you say? Of course—I’m always happy to answer your questions…

1) What is the most intriguing sign I saw this week?

Earlier in the week, I went to see my massage therapist because I hurt my shoulder and it wasn’t getting any better. She did an amazing job as always, and I left feeling all loose and whatnot, and as I was walking down the hall of the building that she had just moved into, I saw a door. It was a plain, grey door, a completely normal-looking door, but the sign next to it said “Room of Requirement”. Huh? I thought as I walked past, but I was tired and a little oily and just wanted to get home. But the door continued to perplex me, and then I got mad at myself for not having taken a picture of it to prove that I was just steps away from some Harry Potter space/time vortex, so I messaged my massage therapist:

Me: Strange request—is there any way you could send me a picture of the sign on the door in your office hallway that says Room of Requirement?
MT: Yes. I’ll send it shortly. Horizontal or vertical shot?

(Notice that she doesn’t even question it—that’s how well she knows me.)

Me: I wonder what’s in there…
MT: It’s the landlord’s room. I’ve never seen inside.
Me: Does your landlord wear a long robe and carry a wand?
MT: Lol.

I have another appointment next weekend, but before I go into her office, I’m going to walk past that door three times and think of diamonds. 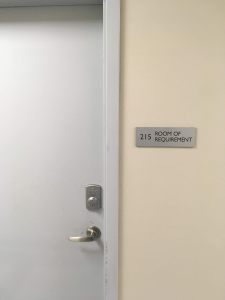 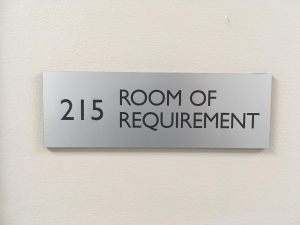 2) What is the weirdest sign I’ve seen this week? 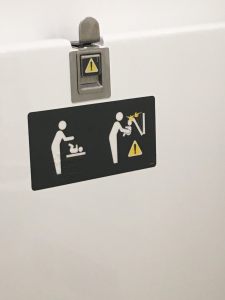 I don’t understand this sign. On the left is a perfectly lovely image of a parent possibly tickling a baby. Or maybe changing the baby’s diaper since the sign is on the change table in the train bathroom. Regardless, the baby looks like it’s having a good time. On the right, however, the parent is slamming the baby’s head into the change table and there’s an exclamation mark which is possibly a warning to NOT DO THAT. I think it’s supposed to mean that you shouldn’t unhook the change table while holding the baby under it, which I’d hope would be pretty intuitive. The best part is that both images have a braille explanation underneath and I wish I knew braille because all I can imagine is that on one side it says, “Put the baby on the change table” and on the other side it says, “Don’t slam your baby into the change table.” At any rate, it’s all very good advice, if a little weak on the delivery. 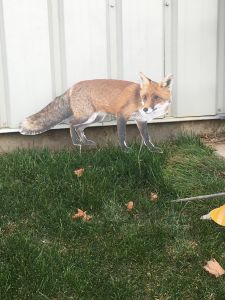 This fox is there outside the door at the warehouse where I was working this weekend. It’s extremely realistic especially if you walk past it just as the sun is coming up. Did I scream very slightly and then let loose a string of epithets when I saw it? I may or may not have. Apparently, it’s there to scare off the geese which like to nest around the doors and then attack anyone who tries to enter the warehouse. I hope it works on the geese because it sure as f*ck worked on me.

4) Am I getting better at math?

Well, I THOUGHT I was. We got one of those weird Bits and Pieces catalogues the other day, you know the one where you can buy jigsaw puzzles, novelty socks, plastic garden gnomes and so on. There was this clock you could get that was advertised as a “fun” math clock. Instead of numbers to tell the time, there was just a series of mathematical equations around the dial.

Me: Hey Ken, check it out! This equation is a square root question—the answer is 2!
Ken: Obviously.
Me: What do you mean, ‘obviously’? I think it’s pretty good that I got the answer considering I haven’t taken math since grade 11. This question here is using long division. The answer is—
Ken: 4. It’s 4 because that’s the number on the clock. All the answers are the numbers on the clock. See, this question is using pi…
Me: And the answer is 9. I don’t even know how to do that kind of math but now I know the answer anyway. Stupid clock.
Ken: So you don’t want it for Christmas?
Me: How many fingers am I holding up.
Ken: The answer is one. 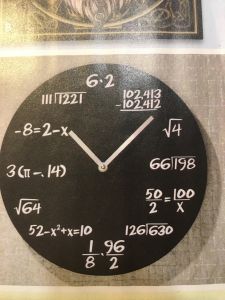 5) Would you rather have skulls in jars or disembodied doll baby heads in jars? 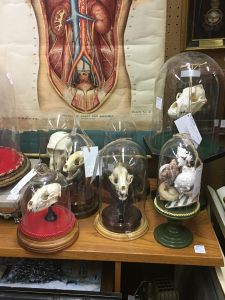 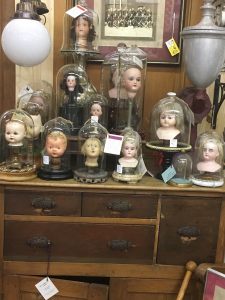 It’s a tough call. Personally, I’m going to have to say neither because I’m not a dark prince. But if I absolutely HAD to choose, I’d pick the skulls—they look more cheerful, especially that one guy near the back who thinks this whole thing is a laugh-riot. Also, they range in price from $110 to $235, which is a lot for only a head. For that price, I want the whole skeleton.

Here’s a conversation I had with a colleague:

Tina: Oh, you have the Christmas ball that I gave you last year. Are you going to put it up?
Me: Yeah, I’m decorating my office on Monday.
Tina: I already did mine—come see. I put all my balls up.
Me: You have a lot of balls.
Tina: I KNOW! Do you want some of my balls?
Me: I’m good for balls. I have a couple of my own.
Tina: Balls! That sounds kind of funny, doesn’t it.
Me: Yes. Yes, it does.