Have you ever had a relationship with someone who was a bit of a dick, but you needed him desperately and couldn’t do without him? No, I’m not talking about Ken, who is seldom a dick. I’m talking about my family doctor.

21 years ago, I had a terrible doctor. This was during a time in Ontario when there was a doctor shortage and it was almost impossible to find a family physician, and once you had one, you NEVER let them go. But I hated her with a passion for some very specific reasons which I won’t get into here but which involved my possible demise due to her negligence, so when Ken and I moved to a small town, I started investigating the possibility of finding a new doctor. There was a clinic in town, but they were only taking on patients if you had a “local reference”, so I struck up a friendship with the woman who lived next door. She and her husband had a dog named “Patches”. He was a purebred Pomeranian. Consider for a moment the type of person who looks at a mono-coloured dog and bestows it with that particular moniker out of ALL THE F*CKING DOG NAMES IN THE WORLD. Patches barked incessantly, like ALL the damn time and shat on our mutual driveway, but I was willing to overlook all of this in exchange for her passing on the good word to one of the docs at the clinic. But first, she grilled me:

Neighbour: Do you have any pre-existing conditions?
Me: No…
Neighbour: So you would describe your general health as very good?
Me: Uh, yes.
Neighbour: I hope you’re being honest with me. If it turns out that you’re high maintenance, my reputation as a referee is down the toilet. PATCHES!! STOP BARKING!!
Me: Ken and I are VERY fit, no worries.
Neighbour: OK. Dr. Monteith is a very good DOCTOR.

The red flag should have gone up because of the ominous way she said “DOCTOR” but I was young and naïve. The clinic agreed to take me on, and Dr. Monteith (not his real name) was finally mine, and Ken’s too. After a couple of months, I had to schedule an appointment:

Dr. Monteith: Why are you here?
Me: I took a pregnancy test and it came back positive.
Dr. Monteith: And?
Me: Well, last time it turned out to be ectopic and I had to have surgery. In Italy.
Dr. Monteith: Oh. Here’s a requisition for an ultrasound. We’ll let you know if there’s a problem this time.

And it was then that I realized why my neighbour had emphasized “good DOCTOR”. Yes, he was a very good doctor, but he had the bedside manner of a bridge troll:

Sure enough, I WAS fine, and made it through pregnancy and many other health scares:

Dr. Monteith: Why are you here?
Me: I’m having chest pains.
Dr. Monteith: It’s probably stress. I can recommend some books that you can read about reducing stress.
Me: If I had time to read books, I wouldn’t be stressed. Ha Ha…
Dr. Monteith:
Me: Anyway, if you really think it’s stress, give me 3 Ativan. The next three times I have chest pains, I’ll take one. If the chest pains go away, then I’ll accept your diagnosis.
Dr. Monteith: Fine. Now pay the toll. It’s one goat for today’s appointment.

OK, that last part was a lie. And as it turned out, the Ativan didn’t help the chest pains—it just made me not give a sh*t about them. So he sent me for a stress test and gave me a heart monitor. I was fine.

But despite the fact that he’s been my doctor for over twenty years, I know very little about him. I know that he has two children because for the first ten of those years, there was a picture of two small kids on a poster titled “Doctor Daddy” that they had obviously made for him. The other thing I know is that he played tennis at some point, because once, I had to make an appointment and the receptionist said, “Oh, you’ll have to see Dr. Stellen; Dr. Monteith has to have knee surgery for an old tennis injury.” So I went to the office, and in came Dr. Stellen. He was charming, friendly, and affable, and at the end of the appointment, he actually said, “Is there anything else I can do for you?” He was also twenty-five minutes late. And that’s the one redeeming thing about Dr. Monteith–he’s ALWAYS on time. In fact, I don’t think he’s ever been more than 5 minutes late for an appointment in the twenty years I’ve been seeing him. This is because he does NOT make small talk. He’s not interested in how your day is going, whether you’ve been on vacation, if you’ve changed jobs—the only thing he’s interested in is why you’re there and he gets right to the point. Strangely, however, and very uncomfortably, the only time he was ever chatty was when he was doing my yearly internal exam:

I’d like to believe he was trying to put me at ease, but I doubt it, based on this conversation two years ago:

Me: Now that I don’t have the prerequisite lady parts, do I still have to have a yearly internal exam?
Dr. Monteith: No! No, you do not!

We both smiled in relief at this positive change in our relationship. Which brings me to Thursday. I’d been having problems with allergies and started getting these weird migraines, so I called on Tuesday and made an appointment to see Dr. Monteith. I was in pretty bad shape as evidenced by the email I sent my boss to tell her I had to go home for a doctor’s appointment. About half an hour later, she appeared in my office, all concerned, and said, “Are you OK? You really had me worried. I think it’s the first time I’ve ever seen a spelling mistake in one of your emails!” and I was like “Aw, that’s the nicest thing anyone has ever said to me. I just can’t see out of my left eye right now.”

So I went to his office on Thursday, and he walked in the examining room right on the stroke of 11.

Dr. Monteith: Why are you here?
Me: I can’t breathe out of the left side of my nose, my face hurts, and I’m getting those weird ocular migraines again. (*phone rings*) Oh sorry! I’m being harassed by Turkish telemarketers!
Dr. Monteith:
Me: I’ll turn the ringer off.
Dr. Monteith: Thank you. Let’s see. Hmm. Yes, it looks like an infection. Here is a prescription for 7 days of antibiotics and 6 weeks of this special nasal spray. If it doesn’t clear up, I’ll send you to an Ear, Nose, and Throat specialist. You should also get a humidifier. OK? Bye.

Over the years, I’ve come to accept his bedside manner and appreciate the fact that he is really good at the medicine stuff. He always knows when there’s something actually wrong and doesn’t take any chances. I just pray he never retires. He might be a bit of a dick, but I’m still alive. 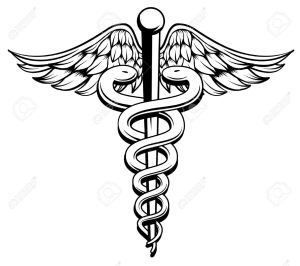