So if you were wondering where I’ve been the last few days, we just got back from Ottawa. K and her girlfriend, the lovely V, had asked for a trip together in lieu of other presents, and I have to say that it’s wonderful when your child thinks a great gift would be to spend time together. I also have to say, it was a capital trip, haha (that’s an Ottawa joke) which combined my favourite things—walking a lot in the freezing cold and looking at plaques and if you know me at all, you’ll know I’m being outrageously sarcastic. Ultimately I DID have a good time, despite the way it began, which was arriving at the hotel to discover that the check-in line-up was almost out the door. The kids were guarding the luggage, Ken was dealing with the car valet and I was standing there, trying to figure out what the f*ck was going on when suddenly a cheerful, matronly woman named Denise appeared:

Denise (yelling): Hi Everyone! My name is Denise. I just wanted to let any of you ‘newcomers to the line-up’ know that our computers are down and we have to check everyone in by hand. We’re very sorry about this, but I hope you’ll be patient seeing as it’s the time of year for goodwill among men, peace on earth etc. If you have any questions, please don’t hesitate to ask.
Me: Denise? DENISE?!
Denise: Yes?
Me: Will it help if we have the computer print-outs of our reservation?
Denise: No. But thank you for asking. PEACE ON EARTH, FOLKS!

The people behind me agreed with me that the only reason the hotel had sent out Denise was that she seemed the least likely to get throatpunched by an angry mob. But don’t forget, this is Canada, and aside from the profuse apologies, there was also a wonderful moment when the hotel’s chefs suddenly appeared with carts containing urns of coffee and several large charcuterie boards so that the people standing in line could help themselves to drinks and snacks. Which would have been great except for the large number of small children who suddenly appeared in the lobby, descended upon the charcuterie like a plague of locusts, stripping the wooden boards bare in a matter of seconds, then disappeared among the Christmas tree display again, carrying all the cheese knives with them–it was a little disturbing.

We finally got checked in and planned the next couple of days. Remember that we were with two twenty year-olds whose plans naturally included sleeping late, but that was fine with me. Here are the highlights of the trip:

1) The Museum of History

Yes it was. ALL THE HISTORY. The most interesting part was that we walked to the Museum and at some point, crossed over into Quebec, where it’s located. The only difference I could tell was that instead of saying “Hi Bonjour” which is what they do in Ottawa, they say “Bonjour Hi” because French is the first language there. We had an interesting conversation about how Canadian provinces have no discernible borders, but that you apparently can’t bring beer from Ontario into Quebec, and I was like “How would anyone even know? The only person we saw before we got to the museum was a bus driver having a smoke break.”

There are some pretty astounding Canadian artists in their permanent collection, including many works by the Group of Seven, who were called that because there were seven of them. They were apparently very groundbreaking painters who created a lot of controversy, which seems strange today. In fact, in front of one stunning piece depicting a lush garden, there was a quote that said it was initially condemned for using such a huge canvas to depict a mundane subject and I said to Ken, “Everyone’s a critic!” Then we went into the “special exhibit” of paintings by some dude named Paul Klee and I was like “This guy sucks!” just to prove my own point. I didn’t know anything about him but here’s a description: “Paul Klee was an Expressionist painter who created witty and childlike works which detached colour from physical expression.” In other words, “my kid could have done that.” Here’s a test. Look at the images below and guess which one Paul Klee painted in the late 1800s, and which one I painted it couple of years ago because I had some leftover paint: 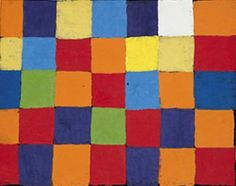 The second one is mine and I call it “Klee-next”. I just named it now, proving that I am also childlike and witty. And I know I shouldn’t make fun of people like Paul Klee–I think my problem is that I’m only awed by things that I could NEVER do myself. And I won’t even get started on the art “installation” which consisted of 6 plastic buckets scattered around the floor of a gigantic room because I could do that one too, but mine would only have five buckets because five is much more art-y, as everyone knows.

Yes it was. ALL THE WAR. As we were walking into the first exhibit, there was a poster on the wall that said, “Come and celebrate your birthday at the War Museum!” It featured cupcakes and candles and it was right next to a display of shrapnel wounds. Can you imagine? Like “Come on, Bobby, it’s time to open your presents! Why are you crying?!”

At any rate, we had a wonderful time together, playing board games in the evening, and visiting some family. We never did get to the Museum of Nature, but I’m sure it has ALL THE NATURE.