“What the f*ck is up with raspberries?!” I asked Ken in the car yesterday. Ken looked simultaneously taken aback by the question yet somehow not very surprised at the way it was put to him.

“Isn’t the whole point of fruit, of virtually EVERYTHING alive on this planet, to procreate and spread in the most efficient way possible? Like cherries, for example. Birds and tree-rats eat them, then they poop out the pits somewhere else where a new cherry tree can form.”

“I’m missing the point,” Ken answered. “Why are you so mad at raspberries?”

“Because they’re f*cking stupid! AND passive-aggressive. The berries are on top, all beautiful and beckoning, and then you get in there and it’s like being attacked by a school of piranhas. No wonder they’re almost extinct.”

“Well, they should be! They’re stupid. That’s their slogan: Raspberries—The Stupid Fruit.”

Right now, you might be wondering exactly what prompted my anti-raspberry rant. Then again, if you’ve ever tried to pick raspberries, you probably know. Yes, that morning I had gone out with a bowl and a very optimistic attitude, forgetting as I do every year that raspberries are the devil’s spawn. Sure, they taste delicious, but isn’t that just part of their evil charm? It’s like when you see a cat, and it looks so adorable and squishy, and it bats its eyes at you and rolls over, then you try to rub its tummy and it grabs your hand and bites you. Raspberries are essentially the cats of the fruit world. And the worst part is, I didn’t even plant them—they just appeared, thousands of them, from god knows where. But I thought, I might as well take advantage of the situation. Unfortunately,  I came back into the house with a small bowl of berries and huge gashes on my arms and legs. At one point, I was so caught up in the thorns that I couldn’t move without ripping my T-shirt and pajama bottoms (yeah, PAJAMAS. Don’t judge me—it was only 10 am and it was Saturday). I’m sure the neighbours were a little concerned when I started screaming, “Let me go, you m*therf*cker!!” Although as a side-note, the police never arrived and now I’m seriously doubting the competency of our Neighbourhood Watch.

I was attacked just taking this picture.

But my ire isn’t reserved solely for the dreaded raspberry bush. I also hate a few other stupid plants:

These are the scourge of the forest. Nothing will grow under their “drip line”, which sounds really disgusting but that’s what tree people call it. And their nuts are SAVAGE. They drop down at the slightest hint of a breeze, and it’s like they’re TRYING to kill you. We have one in our front yard that’s over 80 feet high, and I swear there’s an evil sprite that lives in it, whose only job is to throw walnuts at people. Remember the episode of the Twilight Zone where William Shatner is a passenger on an airplane and he sees a gremlin ripping the wing apart but no one will believe him? I believe him, because that thing lives in my walnut tree now. And it’s in league with the squirrels, who keep burying the nuts all over my yard, causing new black walnut trees to spring up in random places like the middle of a flower bed, beside the pond, or up through the floorboards of the porch. You can’t even ignore them, because they grow so damned fast—one minute it’s 4 inches high; two days later, you need a chainsaw to cut it down. They’re perfect for annoying other people though. Yesterday, my mom told me that my brother’s neighbours had built this monstrosity of a garage overlooking his backyard. She wanted to know what he could plant that would grow quickly and block it out. “A Black Walnut Tree”, I said. The best revenge is slimy, green, and will give you a concussion.

This flower is the bane of my existence, as invasive as daylilies but with worse foliage. Trying to get rid of them is almost impossible—you pull out one, and ten more pop up in its place. You exhaust yourself digging them all out and you think you finally got rid of them, but the next year, they’re all back again. The only one I like has pink and white candy striped petals, and it’s the only one that WON’T GROW.

If their flowers were pink and white striped, I would have no complaint. I just don’t like yellow.

Someone gave me an orchid once. It was a gift, I suppose. After a week, the flowers fell off. Three years later, and I still have three leaves and a stick. I don’t think I’ve ever met anyone who has an orchid with flowers on it. At work, there are several people who also have plant pots full of leaves and sticks. Two weeks ago, it was a co-worker’s birthday and she was given an orchid. We all stood around ooh-ing and aw-ing: “In a couple of weeks, that’s going to be a very lovely stick!” People say, “Don’t water your orchid–give it one ice cube a week.” Frankly, I think that’s a waste of good ice. And why are the roots always growing out of the pot? They’re like tentacles reaching out to strangle you, but they can’t because they’re too weak from the cold.

4 years later–not even a stick anymore.

Now, don’t get me wrong—I love my garden and ALMOST everything in it. I have some beautiful hostas, which are so hardy that you can apparently plant them upside down and they’ll still grow. Actually, I find that a little disturbing, like the way your hair and fingernails continue to grow after death, but they’re pretty. And I have peonies, and bergamot, and roses, and hollyhocks that suddenly just appeared in the perfect spot in a flowerbed as if I’d put them there deliberately. I made jam last weekend with the cherries from our own tree (certified organic, which also means that I had to break open EVERY SINGLE CHERRY to make sure there were no worms in them). Later this summer, I’ll make jelly with quince from a bush that sprang from an old pear tree because I am THAT f*cking earthy. 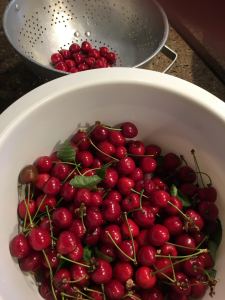 So Happy Canada Day everyone, even if you aren’t Canadian. I’m going to celebrate by putting on a hazmat suit and picking more raspberries, because Canadians are nothing if not determined, and I have a cheesecake to make.

Leave a Reply to Spoken Like A True Nut Cancel reply