For a little while now, I’ve been experiencing things that put me in mind of hell. I feel like Dante, making my way through a landscape that just gets more and more bizarre. And every time I think I truly know what my own personal hell would be like, something happens that’s even worse. Oh don’t worry—none of it is truly tragic. I recognize that people go through things that are absolutely nightmarish, but in keeping with the spirit of this site, my version of hell is more like a Monty Python sketch, but one where Terry Gilliam plays all the roles and John Cleese is nowhere to be seen. And unlike Dante, I don’t have the 9 circles of hell—I have the Five Dickish Rings.

It all started a few weeks ago, when I was working offsite. Every day, I would either have to drive from downtown Toronto and back, or from my actual house and back. One particular morning, I was driving in the dark, in the rain, surrounded by transport trucks kicking up spray, and the only radio station I could get was the one that does news and traffic incessantly, which was probably the WORST thing about the whole experience, and I thought, “This is my personal vision of hell—driving on this damned highway forever with a guy who is PRETENDING to be in a f*cking helicopter but who is actually just a winged demon, and who is telling me that traffic is jammed from Townline Road to Mississauga due to volume.”

After the nightmare that was working for 16 days straight without a day off, I finished work and came home. Ken had bought us all tickets for ‘Mardi Gras Night’ at the community centre. I had this weird idea that the local Lion’s Club was going to transform the community centre into a dimly lit enclave where we would go incognito in our fancy masks, and gamble the night away to the strains of jazz music and incense. I actually know nothing about Mardi Gras, if you haven’t guessed from the previous description, but if Mardi Gras means fluorescent lights, people dressed in jeans and ball caps, and a guy yelling out numbers to the elimination draw every five minutes through a loudspeaker, then Fat Tuesday it is. Well, there WERE beads. One string of dollar store beads per table. We got there early and snagged them so that I, my mom, K, and her girlfriend (the lovely V) each had one. All I could think was “This is my own personal version of hell—wearing plastic beads, sitting in an incredibly noisy small town community centre surrounded by drunk people and losing money to a man who looks like he wants to staple your elimination draw ticket to your face.”

I walked to the local grocery store last week with a colleague who wanted to buy salad for lunch. There were many delicious options—spinach with chicken, dried cranberries, candied pecans, apples, and balsamic vinegar was my particular favourite if I was going to actually eat salad. What did she pick? Spring mix with hardboiled eggs and chunks of avocado in a blue cheese dressing. I honestly said to her out loud, “This is my own personal version of hell—being force-fed that sh*t three times a day.”

I came home on Thursday night. Ken was away at a conference, so I was naturally a little nervous at being home alone, but at least I had Titus and Raven. On Thursday night, Titus pretty much ignored me because he was pissed off at Ken for not being there to walk him. On Friday night, it was another story:

Titus: Hey, whatcha doing?
Me: What do you mean, ‘what am I doing’? I’m sleeping!
Titus: I need you to open the door. I’d do it myself but I don’t have opposable thumbs.
Me: What? I let you out three times before bed. It’s 3 o’clock in the morning!
Titus: The heart wants what the heart wants.
Me: Fine! Make it quick. (long pause) Where the hell are you?!
Titus: I was just taking in the night—
Me: MORNING
Titus: —air.
Me: OK, fine. I’m going back to bed.

Titus: Hey, whatcha doing? By the way, my tummy’s a little upset…

This went on for several hours. All I could think was “This is my own personal version of hell—being woken up at night every hour by a dog who may or may not have diarrhea, so you HAVE to get up and let him out just in case. If you do, he will disappear into the night, giving you no choice but to wander around in the cold night air in your bathrobe and slippers to find him. If you don’t let him out, he will have pooped all over your favourite Persian rug. It’s literally the devil’s version of Schrodinger’s Dog.” 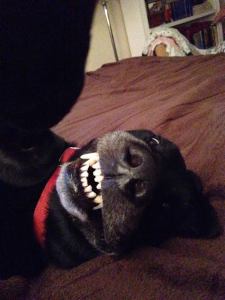 On Saturday, I had a book signing, which is to say that I was invited to come to a local mall by a book store and promote my novel. I was a little nervous, but I thought, ‘People do this all the time. I’m sure they have it all organized.” When I got there, right before 1 pm, there was nothing set up at the store. I saw the owner, and he said, “Oh right. There’s the table out there, and here are a couple of book stands. See you later.” The table was in the middle of the mall, right between the Fido Mobile Booth and a lady who was raising money for Cystic Fibrosis. I sat there for two hours while people walked by me and stared at me. Thankfully, my parents, my aunts, and a friend came by to say hi. My parents and my aunts pretended like they didn’t know me, and took a picture of us all so at least the five teenage boys who work in the Fido booth wouldn’t think I was a total loser, but after my family left, I still had another hour to go. At 2:30, I thought, “This is my own personal version of hell—sitting at a table by myself in the middle of a busy, incredibly noisy mall, while strangers walk by and stare at me.” At 2:56, I thought, “You can do this. You only have four minutes left”, at which point I realized that I was making a low, keening noise under my breath and slightly rocking back and forth in my chair. Finally, at 3 pm, I put my books back into my bag and went into the store. “Oh, don’t you want to stay for a while longer?” he asked.

But later that day, I was at the grocery store, and I bumped into a really nice young guy that I used to work with. We exchanged pleasantries and then he said, “There’s a newspaper article about you pinned up on the bulletin board in our staff room. You’re a famous author now, right?” And while Sartre might have claimed that hell is other people, they’re also heaven sometimes too.

Happy Mother’s Day. Whether you’re a mom, an auntie, a second mom to someone, a special person who cares about your friend’s kids or whatever, here’s to all the wonderful women who make strong connections with children and give them great lives.