Anyone who knows me knows that I’m not very athletic. I only run if something is chasing me, although my idea of exercise HAS evolved from drinking wine while peddling a recumbent cycle to taking a brisk walk with the dog. It’s brisk because it’s the only way I can keep up with him—he’s currently terrible on a leash. He already knows the word ‘Walk’ and goes out of his mind with joy when he hears it to the point that you can barely get the leash attached to his collar before he’s out the door and gone. I’ve tried all kinds of things to calm him down but nothing works:

Me: Heel!
Atlas: Heal what? I’m fine.
Me: NO, stay by my heel.
Atlas: Then I’ll miss that awesome telephone pole. Also, there might be some squirrel sh*t that I have to smell. Ooh, a butterfly—come on!!

Cookies don’t work—well, they work until he’s swallowed them, and then he’s right back to strangling himself with his collar. He WILL sit at the corner, long enough to earn a ‘good boy’, then he laughs and dashes away, dragging me behind him. At 5 months old and 40 pounds, he’s hard to control but at least I’m getting my cardio in. Once everything opens up, I’m definitely taking him for obedience classes, mostly because he’s been trying to drink my wine when I’m not looking.

Anyway, aside from my daily race around the block, I don’t do anything too strenuous, so the other day when Kate asked, “Hey, do you want to go rock climbing with me?” my first instinct was to say “Yes”, because I love hanging out with her, and my second instinct was to whisper to Ken, “My god, what have I done?” He whispered back, “Just climb the kiddie wall—you’ll be fine.” I found some old exercise gear in a drawer, put on some running shoes, and we set out. I should mention that my daughter has her own rock-climbing shoes, so that should tell you exactly what the differential is between us in terms of rock climbing acumen. We got to the facility and walked in. It was huge, with walls of grips going up twenty feet at least, surrounded by 2-foot-thick mats. “Where are the ropes?” I asked. “Why isn’t anyone got a rope around their waist?” Kate informed me that this was ‘bouldering’ which is basically free climbing, so there went my dream of just swinging casually from a rope like a trapeze performer (also in this dream, I’m holding a glass of wine. It was a nice dream). We got up to the counter where we were met by a perky young woman.

Perky Young Woman: Hi! Is this your first time bouldering?
Me: Yes.
PYW: OK, let’s go over some safety guidelines. First, do you know how to fall?
Me: I think so, but I generally tend to avoid it, so I’m probably not an expert or anything.
PYW: OK, well the important thing is to keep your arms crossed over your chest. Don’t stick them out or you might break something.
Me: Exactly how much falling is going to be involved here?
PYW: Haha! Also, don’t touch the ceiling or any of the ductwork when you get to the top.
Me: You’re very optimistic about that possibility.
PYW: Haha! The walls range in difficulty from Beginner to Really Super Hard Crazy Advanced. (*Note: she didn’t actually say ‘Really Super Hard Crazy Advanced’, but I can’t remember the actual name and that’s what it looked like.)
Me: Just point me at the kiddie wall.
PYW: Hahahaha! We don’t have one of those.

Meanwhile, Kate had already chalked up her hands and was raring to go on a course that was on a backwards leaning incline (see pic 1). She directed me to a VB section of wall, which is to say Very Beginner, which I regarded dubiously. “How do I start?” She showed me and then said, “You try it.” I put one toe of my rental shoe on a grip, grabbed a handhold, and was immediately immobilized. I looked to her for help, but she was halfway up another wall, kind of like Spiderwoman. “Keep going, Mom!” she called out as she scaled the wall like a professional. I persevered and managed to make it up the course, which was straight up and had substantial handholds (see pic 2). Still, I made it to the top, about 15 feet up, and got a little excited until I realized that I had to climb back down. I might have looked like a gecko but at least I didn’t fall (see pic 3). I ended up doing a couple of other sections—one was even slightly harder than Beginner, as Kate cheered me on, and then I spent the rest of the time proudly watching her. The next morning when I woke up, I was only slightly screaming from the pain in my arms. And I can’t wait to do it again. 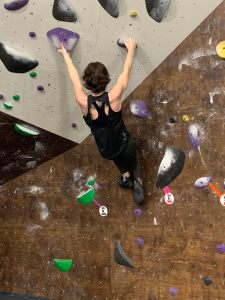 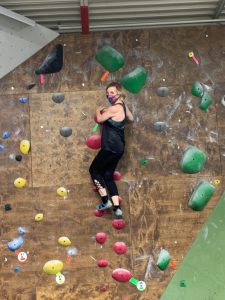 57 thoughts on “Climbing The Walls”