On Friday, I was sitting at my desk at the secret agency when my phone screen suddenly lit up. I looked over, and there was a text message. I immediately stopped what I was doing to investigate, because no one ever texts me except the people I work with, and I was AT work. And I don’t mean to imply that I’m unpopular or live a very lonely existence—it’s just that Ken still insists on using Blackberry Messenger like a 90 year-old man and Kate only uses Facebook Messenger, because god forbid a daughter should actually ever call her mother. As for the rest of my family, they DO call me at work, usually during meetings and whatnot, causing me to rush out in terror, worried that the worst has happened, only to be asked to come to dinner on the weekend.

So I sat there for a moment, pondering the possibilities, and then opened up the message. It said, “Just checking if you’re available for a job.” I was immediately intrigued. Of course, I already have a very good job, but I’m only an “Acting” Manager, and there’s always the risk that one day, I’ll have to stop acting like one, and actually BECOME one. So I thought for a moment, and then wrote back, “Ooh, what kind of job?!” I’ll admit that I may have sounded a little over-excited, but tone is hard over text, and I wanted to convey a sense of child-like wonder as well as tremendous enthusiasm. I waited breathlessly for a reply. Nothing. Had I overplayed my hand? Still nothing. To pass the time, I went to the website of the company that the text had come from. There were some very interesting jobs available there: Medical Sales Representative, Relationship Banker, Records Management Specialist, Unloader…I didn’t know what some of these were, but they all sounded very life-fulfilling.

It was almost lunchtime, so I went to heat up my leftovers. When I came back, there was an ominous reply. “It’s a warehouse job”.

Suddenly, it occurred to me that perhaps this wasn’t a job, but was, in fact, a “job”. Was I being offered the opportunity to commit some kind of crime? And then it all made sense: Medical Sales Representative must be code for Drug Dealer. Relationship Banker? That was obviously running an Escort Agency. Records Management Specialist, I guessed, would be something akin to a Mob Accountant. Unloaders…unloaded stolen goods. What had I gotten myself into?

But then, I had a thought. I was always trying to challenge myself to try new things, things that I would never normally do. And a “warehouse job” was certainly something I’d never entertained before, but why not? I mean, I don’t know much about heists, but there are a LOT of movies out there about them, and if Sandra Bullock could do it, why couldn’t I? I regularly organize and oversee an annual event involving more than 1500 people at a large convention centre—how hard could it be to rob ONE warehouse? And the best part was that the secret agency had its OWN warehouse that I could practice on! But wait. The one thing I knew from watching all those heist movies was that a good warehouse job always involved a team. Luckily, I had a team, and a very efficient and intelligent team at that. And the best part was that we wouldn’t need any type of weapon because they are all very fit, kind of like ninjas, if the way they sneak up on me in my office is any indication. I was getting an Oceans 8 vibe from the whole scenario, and starting thinking about next steps, the most imperative of which was that I needed information: how big was the warehouse, where was it located, what was the security guard’s schedule, how many cameras were there, and so on.

I took a deep breath. Yes, I was going all in. “Send me the specs. I’ll get my team together,” I wrote back. I imagined them at the other end of the conversation, giving each other quiet high fives and saying, “It’s on. Mydangblog is getting her team together. Send the file with the blueprints.” While I waited for what I assumed would be a VERY appreciative response, I realized that I hadn’t even asked about pay, like how many bundles of Bordens I was going to get (Bordens are the Canadian equivalent of Benjamins, but only 76 cents to the dollar). But while I was picturing a large leather case, and all those shiny Bordens, the reply came: “What do you mean?”

It suddenly occurred to me that, perhaps, I had badly misjudged the offer. I wrote back, “Is this a job, or a ‘job’?” Again, the answer came back: “What?” I did the only thing I could do, and replied, “Wrong number.”

And then I had an epiphany. The message was for Shane, “Blayz for Dayz” Shane who had apparently owned my phone number before me, whose girlfriend still tried to Facetime me, whose mother left me angry texts demanding that he call her right away, whose friends like to play soccer and smoke weed. I felt terrible—not only had I missed out on what might have been a VERY lucrative opportunity, I had also probably gotten Shane fired from his temp job. I hope he doesn’t have to resort to crime to pay his bills. But if he does, I know where he can find a team. 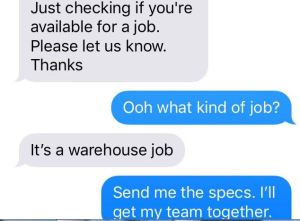