Like a lot of people, I’m pretty good at MacGyvering—that is to say that I can solve complicated household problems with very common household items. I come by this skill honestly—my father was a machine shop teacher and toolmaker by trade. He can make a tool to fix just about anything out of an Allen key, and there were always several things in our house held together with contact cement. Me, I prefer Gorilla Glue, but same concept. Last month, the gingerbreading on our Victorian screen door broke, and there was no way to screw or nail it back together, so I just glued it. Worked like a sticky charm. I have a utility drawer in both my condo and at home which contain the only 4 actual tools I’ve ever needed. 1) One of the many hammers I own 2) needle nose pliers 3) a multi-screwdriver 4) a staple gun. 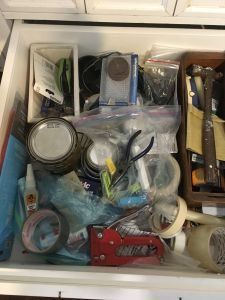 It’s a thing of beauty.

Everything else is assorted flotsam that I can use to MacGyver, including:

a) Cardboard: This is handy for folding up and putting under a table leg or whatnot to stabilize it. Also, our house is very old and tilty, so sometimes cupboard doors will just swing open. There’s nothing like a cardboard wedge to keep them in place. Neatly hidden of course—who wants to see cardboard? 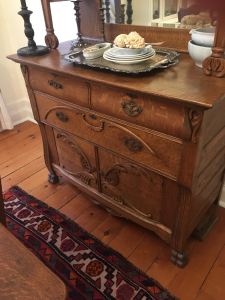 You can barely see it.

b) Plastic food containers: I recently put the empty tub from a very delicious garlic spread upside down in a plant pot in order to raise my Thanksgiving chrysanthemum up high enough that it could be seen. I could have used a smaller plant pot, but hey—I had a tub.

c) Paper clips: These are a multi-use invention that I have rarely used on paper. Zipper pull on your boot broken? Paper clip. Screen on your hair dryer clogged? Paper clip. Feel like poking a hole in something? Paper clip. Bored at work? Paper clip. Enough said.

d) Toothpicks: These handy little gadgets are terrific for repairing reading glasses. One leg is ALWAYS going to fall off and the screw is going to disappear into a space/time void. What better item to use to fix it than a toothpick? Just shove one through the screw holes and snap it off. No one will ever know. Also, if you have 17 jar candles that are burned down really far, and trying to light them with a match burns your fingers, make a longer match with a bunch of toothpicks taped together.

e) You can hang a picture on a pushpin if it’s not too heavy. You can move any piece of furniture across a smooth surface by putting a towel under it and dragging it. You can wrap duct tape around your hand, sticky side out, and use it as a clothes lint remover. SOS pads are the only thing I use to clean old, dirty wood before I refinish it.

And so on. But this week, I had my most MacGyver-y challenge yet. My most recent roommate, who is a vegan, messaged me to tell me that she had broken her toilet. “I went to see the concierge,” she wrote, “but he said you would have to hire a private contractor.”

“What part of the toilet is broken?” I asked. She sent a picture of the chain.

Private contractor? Hah! I thought to myself, putting three paper clips into my purse to take back to the condo. “Don’t worry,” I told her. “I’ll take care of it.”

Now, the only thing the girl eats is fruit, so I don’t know WHY she was flushing the toilet hard enough to break the chain, but I don’t eat a lot of roughage either and I recently broke a toilet in the train station. I didn’t tell the station attendant, who is always extremely rude to me–I just got on the train and fled, leaving behind a complete f*cking disaster that I refer to as “her karma”. So who am I to judge? At any rate, I got back to the condo, went straight to my roommate’s bathroom and examined the toilet. I knew enough to drain it first, then I pulled out the chain. Turns out that it wasn’t the chain itself that had broken—the thing on the flapper that the chain was attached to had been ripped off. Well, the flapper was rubber and I had a paper clip, which is always handy for poking holes into stuff. All I needed to do was pierce the flapper with the paper clip and then attach the paper clip to the chain. 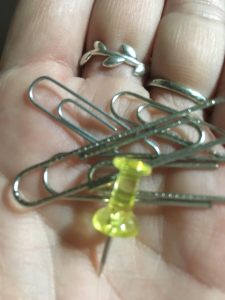 Unfortunately, the rubber was too thick and all I managed to do was pierce my own thumb. Once I was finished swearing, I thought for a minute, and went to my utility drawer. Eureka! I had a push pin. A yellow push pin to be exact. I pushed it into the rubber flapper without sympathy (revenge for my thumb) and hooked a paper clip around it, which I then twisted around the chain. I filled the tank back up and gave it a flush. Perfect. “Flush away!” I told her. “It’s all fixed.”

The next morning, I was at work when I got another text message. “I’m so sorry,” it read. “I must have flushed too hard—the chain came off again.” Then I remembered that she had had a large meal of pumpkin and pineapple the night before—perhaps that was the culprit. Then came the second message: “And the pushpin went down the pipe.” I felt more than a little defeated at the thought that all my MacGyvering had amounted to nothing. It was time to watch Youtube videos and buy actual parts. Which I did after work. I bought three different flappers, not knowing which one would work the best. Luckily, the first one seemed to do the trick, so after draining the toilet, installing it, and practicing a few good flushes, it seemed good as new. “Just be gentle with it,” I made her promise. “And you owe me a new pushpin.”