Last week, one of my colleagues was excited. “What’s going on?” I asked.

“I’m getting a new desk! Apparently, this one is the ‘most worn’ in the office, and the guy from Procurements said they had one downstairs for me. They’re bringing it up later, so I have to clear everything off this one.”

And of course, we all gathered around, breathless with anticipation, speculating about exactly what the new, wondrous desk would look like. Fancy? Woodgrain? A hidden drawer? The possibilities were endless. Finally, late in the afternoon, the door to the secret agency swung open, and two men appeared with a cart. On the cart was the EXACT SAME DESK that my colleague already had. They disassembled hers, and put the ‘new’ one in place, with all of us watching in a rather dejected way. It was EXACTLY AS WORN as her previous desk, which was now being taken downstairs, to await the moment that Procurements would use it to replace someone else’s ‘worn’ desk. Aside from our abject disappointment at this debacle of musical desks, there was one bright moment when one of our group mentioned that we could improve things slightly by adding a touch of décor to my colleague’s cubicle. As we got more and more carried away with things like a disco ball, twinkle lights, and a chair with cup holders, it occurred to me that there was the definite possibility for a reality show here. I have no idea how to pitch anything to the HGTV network, so I’m hoping that one of their producers will somehow read this and make it happen. Thus, I present to you several ideas for fantastic reality shows, starting with…

Host: Hello once again, and welcome to Cubicle Wars, where each week, two co-workers compete to see who can create a stunning office space with little more than a $50 gift card to the Dollar Store and their own imaginations! Let’s meet our challengers! This is Jill, a temp worker with a fondness for frogs, as you can see by the many, many statues and stuffies that she has on her desk. Tell us a little bit about yourself, Jill!
Jill: Frogs are amphibians and can speak 7 different languages.
Host: Only one of those things is even correct! Welcome, Jill! And now here’s our other contestant, Josh. Josh is an engineer, so no one knows what he actually does!
Josh: That’s not true. I—I…
Host: Exactly! Now here are your $50 gift cards. See you next week, you crazy kids!

Host: Let’s see what Jill and Josh have accomplished. Our live studio audience will then announce the winner!
Audience (which consists of a panhandler that the host found in the lobby): Does anyone have spare change for coffee?
Host: After the show, Stinky Pete! First up is Jill!
Jill: I used my $50 to buy aromatherapy candles and placed them strategically around my cubicle.
Host: That’s it? How many candles did you buy?
Jill: 50, obviously. It was the Dollar Store.
Manager (passing by): You can’t light those, Jill. I told you, it’s a fire hazard.
Jill: FINE, STEVE! But don’t come to me when the power goes out, you fascist!
Host: All right—let’s see what Josh has done. Ooh, a tiki bar theme! Very nice! I particularly like the inflatable palm tree.
Josh: Thanks. I’m very pleased with the way it turned out, although I’ve been getting a lot of side-eye because of the torches. THEY’RE CULTURALLY APPROPRIATE, STEVE! I’M NOT A NAZI!
Host: And now it’s that moment we’ve all been waiting for. Audience, who is our winner?!
Stinky Pete: Is there any whiskey in the tiki bar? NO? Then I pick the candle lady.
Host: Congratulations, Jill. Your prize is that you get to keep all the candles!
Jill: I just want my frogs back. Vlad was teaching me Russian.
Host: See you next time on Cubicle Wars! 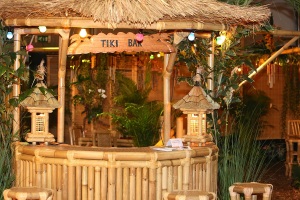 Welcome to the office!

I really think this show has potential. And while I was fleshing it all out, here are some other show ideas I came up with:

In this show, two guys take cheap cars and try to make them look cool. With VERY limited resources.

Host: Tell us about today’s project, boys.
Gary: It’s a 1988 Ford Tempo, base model, beige, with rust accents.
Mitch: We got it for fifty bucks at a yard sale. The upholstery smells like cheese.
Host: And what are your plans for this car?
Gary: No spoilers!
Host: Oh, sorry I asked.
Gary: No, dude—we’re not putting a spoiler on it. Spoilers are pretentious.
Mitch: You’re goddamned right they’re pretentious!

Host: Wow! What a transformation. Tell us what you did!
Mitch: We found bigger wheels at the dump and put them on the back. Now it’s slanty!
Gary: We used duct tape to make racing stripes. I probably should have used a ruler.
Host: Um…did you put a tow hitch on the back of this car JUST so you could hang a fake scrotum ornament off it?
Mitch: You’re goddamned right we did! We made it ourselves out of two oranges and one of Gary’s gran’s old kneehighs.
Both (highfiving): Our car has balls, b*tch!
Host: All right then. Join us next week when Gary and Mitch transform a Pinto into a fancy lawn tractor!
Both: Unsafe at any speed!

Voice-Over Intro: “Meet Meredith, a ‘cat lover’, who roams the streets of her town at night, looking for more cats. She has a LOT—maybe more than 19 but who’s counting? None of them are actually hers; she stole them all from her neighbours. Her house reeks of urine, but she insists she’s ‘not crazy’. You be the judge!”

This show is simple. It’s just hot dogs. Every week. Audience of at least one (Ken) guaranteed.

While you might be thinking that this is a decorating show where people take old portable toilets and pretty them up, you’re wrong. This show is about Bobby “Flip” Johnson, a real douchecanoe who waits until people go into port-a-potties, then he sneaks up and tips them over. He’s killed in episode 3, and the remainder of the season becomes a detective show, where a slightly Asperger’s detective and his madcap female sidekick investigate Bobby’s murder. Kind of like Jackass meets Elementary. Will we ever find out who killed Bobby? No spoilers!